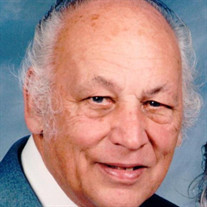 The Story of William C “Bill” Blaufus A Life Well Lived By Larry Blaufus October 29, 2021 William Charles “Bill” Blaufus, 87, died October 18, 2021, with his family by his side at Providence Portland Medical Center. Bill was born December 10, 1933, in Portland, OR to Leo “Bill” and Irene Blaufus. He attended grade school at St. John the Baptist and Central Catholic High School in Oregon and then graduated from Lodi High School when the family moved to California. In his younger days, before a “tennis elbow” injury limited his play, Bill, like his father, was an avid golfer. He was instrumental in forming the Varsity golf team at Lodi High recruiting both the coach and many of the student athletes. He attended college at the University of Portland participating in the Air Force ROTC program, where he met and married Lorraine “Lorrie” Lulich. She was the love of his life for 67 years. He and Lorrie modeled that love to their children right up to the last second of his life. The saying “pucker up” will forever be a special phrase etched on their hearts. Their oldest son Larry was born during his college years. Bill earned a BA in Business, and his Air Force career as a navigator took them to Houston, TX, where Debbie was born and then to Little Rock, AK, Dan’s birthplace. After his military service, earning the rank of lieutenant, the now complete family returned to Oregon. Bill started a career at Portland Loan Company, later became a realtor and founded Fieldcrest Realty and then worked property management for Key Bank. The couple built a brand-new home in Milwaukie where they have lived for over 60 years. Bill was an active member of St. John the Baptist Catholic Church and School for over 60 years. He coached fourth grade to high school age CYO basketball teams. He also coached some very successful Portland Loan Greenbacks baseball teams in the Milwaukie Kids Inc. program. Coach, as many of his players still think of him, was very proud of the fact that he always played everyone, was a true student of whatever game he was coaching and asked only that his players do their best and show good sportsmanship. Faith based education was important to Bill and Lorrie. Their children attended St. John’s grade school and LaSalle High School. A college degree was an expectation he placed on them, and he was very proud that all three of his children graduated. He and Lorrie gave their children the gifts of friendship, love, and independence. Bill was a family man that never did anything to receive recognition or praise. He proudly displayed his well-earned Distinguished Service Award presented to him by the Milwaukie Jaycees for outstanding community service through loyal, faithful, and unselfish efforts resulting in lasting contribution to community and nation. Bill and Lorrie enjoyed spending time camping in their RV, attending country and bluegrass music festivals, and playing and watching sports. Their favorite trips were to RV rallies with his sister Joan and her husband Ed, and to Copper Canyon Mexico with a group of close friends. Their special place was at Lake Merwin Camper’s Hideaway where family and friends gathered for over 40 years. He devoted much of his time and energy to family members, especially his children, grandchildren, and great grandchildren. He loved the Blaufus family reunions hosted by his brother John and his wife Lauri. He is survived by his beloved wife Lorrie, his sister Joan Goin, and his brother John Blaufus (Lauri); children Larry (Pam), Debra Richardson (Steve) and Dan (Amanda), 23 grandchildren and spouses (Matthew, Renee, John, Sarah, Colby (Tina), Tyler, Michael (Ashley), David (Nakita), Andrea (Tyler), Daniel, Ariel (Gabe), Jordan (Susan), Lindsay, Morgan, Gwen, Gillian and Calleigh); and 15 great-grandchildren (William, Makayla, Savannah, Cooper, Princeton, William, Henry, James, Noah, Emmett, Wyatt, Elena, Gemma, Milo, and Rowan). His nieces and nephews were a very special part of Bill’s life. They all held a special place in his heart. Bill was also blessed to have had too many friends to mention over his lifetime He was preceded in death by his father Bill, his mother Irene and his sister, Ellen Hanson, and brothers-in-laws’ Ed Goin and Johnny Lulich, and his wife Mary, and nephews Mike Blaufus and Steve Goin. The family sends a special thank you to all the doctors, nurses, and support staff that cared for him as part of the Providence system. These front-line workers treated Bill with love and dignity, gave him exceptional care, and delivered that care with the highest level of professionalism. A memorial service will be held Friday, October 29th at St. John the Baptist Catholic Church, Milwaukie, Oregon. The rosary will be held at 10:30, the funeral at 11:00 and graveside service at Gethsemani Catholic Cemetery immediately following. In lieu of flowers the family suggests that donations may be made to St. John the Baptist Catholic Church and School, LaSalle High School or the charity of your choice.

The family of William " Bill" C. Blaufus created this Life Tributes page to make it easy to share your memories.

The Story of William C “Bill” Blaufus
A Life Well Lived
By Larry...