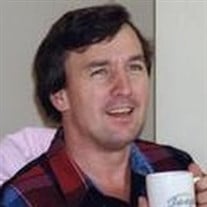 Timothy Harold Jones, of Milwaukie, OR., passed away Monday, September 26th, 2011. Tim was born on February 23rd, 1967 in Seattle, WA. to Kenneth and Barbara (Savage)Jones. Shortly after his birth, his family moved to Milwaukie area, where he attended North Clackams Schools until his junior year when the family moved to Gladstone where he graduated in 1985. After high school Tim studied at Clackamas Community College. On July 10th, 1987 he was joined in marriage to the love of his life, MaryAnne Tuss. Together, they ushered two beautiful children into this world, their son, Antone Jones, and their daughter Ivanna Jones. Tim began his career with Stanley Manufacturing, where his hard work and dedication earned him the opportunity to join the Carpenters Union in the drywall trade. He advanced through schooling, hard work and job training to become a Journeyman in his field. When not working, Tim was still busy, building and molding our future leaders, serving as an Assistant Scout Master for Troop 376. He was very involved in many scout projects and attended the National Jamboree in 2005 with his son, Antone. Outside of work and scouts, Tim was a family man. They enjoyed trips to Sun River, OR. and camping. He also trained as a black belt in Shotokan Karate. When relaxing, Tim really enjoyed playing games on Facebook and catching up with friends. His parting gift to others was being an organ and tissue donor on his Oregon Drivers' License. The lives he will save and change will continue his legacy of giving of himself to the benefit of others. He is loved and so very missed. Tim is survived by his wife, MaryAnne Jones, of Milwaukie; his children Antone, age 20, and Ivanna, age 12, of Milwaukie; his parents Kenneth and Barbara Jones; his sister Kimberly Hensy, and husband Jason, of Beaverton; and his two nieces Brittnie and Robyn. A viewing was be held on Saturday, October 1st, 2011, from 1pm-3pm at Peake Funeral Chapel, 1925 SE Scott Street. Milwaukie, OR 97222. Graveside Services were held at 1:00 p.m. Tuesday, October 4th, 2011, at Lincoln Memorial Park, Happy Valley, Oregon. A Celebration Of Life is scheduled for 10 a.m. Saturday, October 8th, 2011, at Tri-City Baptist Temple, 18025 SE Webster Rd. Gladstone, OR 97027. The family suggests that remembrances be contributions made in Tim's Memory to Boy Scouts of America Troop #376.

Timothy Harold Jones, of Milwaukie, OR., passed away Monday, September 26th, 2011. Tim was born on February 23rd, 1967 in Seattle, WA. to Kenneth and Barbara (Savage)Jones. Shortly after his birth, his family moved to Milwaukie area, where... View Obituary & Service Information

The family of Tim Harold Jones created this Life Tributes page to make it easy to share your memories.

Timothy Harold Jones, of Milwaukie, OR., passed away Monday,...

Send flowers to the Jones family.