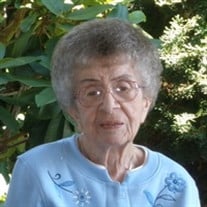 Thelma Irene Lunde, 95, of Clackamas, Oregon, passed into eternal rest on December 28, 2012. She succumbed, after a valiant 2 year struggle, from a rare bone cancer tumor called chordoma. She was preceded in death by her loving husband Albert. She is survived by her sister, Maude Ballard (100 years young) of Portland, Oregon; her Daughter, Dolores and Bob Maynard of Beavercreek, Oregon; her Son Danny and Donna Lunde of Neptune Beach, Florida; 6 Grand Children; 8 Great Grand Children; and 2 Great-Great Grand Children. Thelma worked for Fred Meyer in the accounting office she was on the Fred Meyer Credit Union Board for 41 years, a member of several service organizations, a Volunteer for 32 years at Providence Willamette Falls Hospital, and a member for 63 years in the Rebekah Lodge. She lived alone after the passing of her husband Albert in 1986. Always independent - she cooked, cleaned, and even drove her car up until the first week of August this year. Her hobby and passion was Baking, and she became legendary with all the many baked goods she handmade over 7 decades for family and the various organizations she was part of. She was given the moniker "MAMA THELMA" in later years, attached to a Pie Pan named after her and a fitting tribute to the delicious creations that came out of her small kitchen. Thelma will be laid to rest, next to Albert, in a private ceremony at River View Cemetery in Portland, Oregon. A celebration of her life will be held on Saturday, January 12th, 2013, at 11am, at Clackamas United Church of Christ 15303 S.E. Webster Road, Milwaukie, Oregon. Please wear something purple, or a shade thereof. In lieu of flowers a donation may be made to: Providence Willamette Falls Hospital Volunteers, 1600 Division Street, Oregon City, OR 97045 or Chordoma Bone Cancer Research, Loma Linda University Medical Center, 11234 Anderson Street, Loma Linda, CA 92354.

Thelma Irene Lunde, 95, of Clackamas, Oregon, passed into eternal rest on December 28, 2012. She succumbed, after a valiant 2 year struggle, from a rare bone cancer tumor called chordoma. She was preceded in death by her loving husband Albert.... View Obituary & Service Information

The family of Thelma Irene Lunde (Moffit) created this Life Tributes page to make it easy to share your memories.