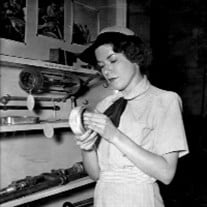 Suzette Aileen (Stennett) Bastiani August 16, 1917 - November 25, 2012 Suzette Aileen Stennett was born August 16, 1917 to Fred and Mary Stennett in Medford, Oregon. Suzette joined her older sister, Mary Elizabeth, (known as Betty) who was born in 1913. Suzette's father worked at the Medford Mail Tribune newspaper as a printer. Her mother ran a boarding house in their home. Suzette helped her mother maintain the rooms for the boarders. The family felt Betty had contracted tuberculosis from a harp that they had purchased for her. During her illness, Suzette would play cards with her sister. Betty passed away when she was in high school. Suzette was an actor on a children's radio program. She had to leave the radio program when she was accused of saying something inappropriate. Of course that wasn't the case, but the station terminated her service anyway. Suzette attended Oregon State College before moving to Hollywood, Ca. She made many acquaintances in the movie business. She was friends with the daughters of movie producer, Harry Sherman. While in Hollywood she married Mr. Woolsey who worked for Mr Sherman. Suzette's marriage was not a happy one. She joined the WAVES while married to Woosley. She was assigned to Bethesda Naval Hospital in Maryland as a Hospital Apprentice First Class during WWII. She shared that she enjoyed the marching during her training. Suzette's service lasted a little over 7 months. After her military service, she moved back to Medford and divorced Woosley. While back at home in Medford, she met Otto Bastiani. They married October 16, 1948. Otto worked for the power company in Northern California. Ron was born June 3, 1949 in Yreka, Ca. and Mary followed 16 months later on October 2, 1950. The family then moved to Prospect, Oregon. Suzette was a Cub Scout Leader and was also involved in the PTA. Suzette made arrangements for the Troop to see old time B Western cowboy, Tim McCoy. Ron gave Mr. McCoy some historical papers his grandfather, Fred, had saved. Then the family moved to Central Point, Oregon. Ron and Mary attended school in Central Point before moving to Gold Rey Dam Ron and Mary attended Crater High School. They made some lasting friendships while living in Gold Rey. Suzette worked at the local mall. Otto and Suzette enjoyed hosting people from foreign countries and continued to do so when they moved to Milwaukie in 1966. Ron and Mary both graduated from Milwaukie High School. Ron graduated from Portland State University with a degree in History. Mary too graduated from Portland State University with degrees in French and Education. Suzette did bookkeeping for various businesses in the area. The family continued to host foreign students and families. Suzette was a dog lover. They had many dogs joining the family over the years. Otto worked for Pacific Power and Light until his retirement. In retirement, they enjoyed traveling. They went to Europe and Costa Rica. The family always seem to have a home improvement project in progress. Otto passed away August 7, 1995 from complications from heart surgery. Mary and her sons moved in with Suzette. Mary continued to live with her mom until her passing April 17, 2011 from cancer. Mary's son, Sean, cared for Suzette in her home until she fell and broke her hip in February of 2012. She then resided at Deerfield Assisted Living until she moved to Powell Valley, a memory care facility. Ron took her dachshund, Emmett to visit her. She missed having Emmett with her. Suzette passed away, November 25, 2012 with her son, Ron, by her side. Survivors include her son, Ron (Carol), Stepchildren, Robert Bastiani (Sue) Seaside, Or, Ida Luke (Robert) Cotate, Ca, Grandchildren Erika Best, Antonia Torrez (Robin), Sean Brock (Angela), JP Brock (Sara), Step grandchild, Jenni Maniscalco (Mark) New Braunfels, Tx. Great Grandchildren, Derrik Best, Bella and Eligh Torrez, Joey and Sofia Brock, Ava and Olivia Brock and step great grandchildren, Dominic and Eva Maniscalco. And her beloved dog, Emmett. The service will be held at Willamette National Cemetery at 11:00 am on December 6, 2012. In lieu of flowers, please consider a donation to Adventist Hospice or The American Heart Association.

The family of Suzette Bastiani created this Life Tributes page to make it easy to share your memories.

Send flowers to the Bastiani family.