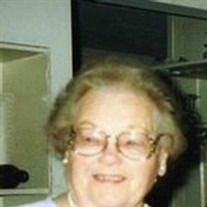 Ruby Schunk-Stocking died peacefully with her family, Thursday June 18, 2009. She was Born Ruby Kathryn Billeter in La Dora, Iowa on August 29, 1918. Born to Oral Lee Billeter, and Claradda Stauffer Billeter. She is preceded in death by her brothers James, Robert, Richard, and her sister Pearl Paul. Ruby is lovingly survived by her four children John Schunk, Victor Schunk, Rosemary Carrington, and Rita Stills. Ruby has seven grandchildren Richard Carrington, Jason Fish, Melissa McCartney, Brian Stills, Michael Schunk, James Schunk, Steven Schunk, and great grandson Aden Schunk, 6 step children: Dale Jr. Brenda, Joyce, Dennis, Evelyn, Janet She is also leaves behind cousins, nieces and nephews. Ruby moved with her parents to Oregon and the Willamette area around 1932. She graduated West Linn High School in 1937 She was employed as a nurse's aid, as well as a cook in various institutions. In 1939 Ruby married Victor Schunk. Together they had four children. Victor died in 1967. Ruby remarried in 1985 to Dale Stocking who died in 1997. She then lived with her family in Oregon City and Culver. Ruby was in good health until 2008. Her health then deteriorated and she was told she had cancer days before she died. Ruby died in her room knowing her family was there. She was 90 years old. Visitation will be held 10 am to 10:30 am at the church before mass, Funeral Mass will be Wednesday June 24th at 11:00 a.m inside St.John's Baptist Catholic Church 10955 SE 25th Street Milwaukie, Oregon 97222 Ph: 503-654-5449 A Reception following service at the church all are welcome Ruby will be laid to rest beside her husband Victor in a private burial at Gethsemani Cemetery.

Ruby Schunk-Stocking died peacefully with her family, Thursday June 18, 2009. She was Born Ruby Kathryn Billeter in La Dora, Iowa on August 29, 1918. Born to Oral Lee Billeter, and Claradda Stauffer Billeter. She is preceded in death by her... View Obituary & Service Information

The family of Ruby K Schunk- Stocking created this Life Tributes page to make it easy to share your memories.