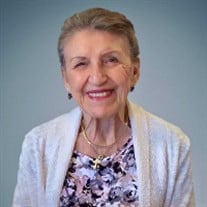 Rose Marie (Fazzolari) Cruickshank, age 85, of Milwaukie, OR passed away on August 25, 2019, after a courageous battle with Lewy Body Dementia. Rose was born in Portland, OR on September 26, 1933 to Italian immigrants Salvatore and Mary (Sistini) Fazzolari. She was the baby of the family with five older brothers. Rose grew up in Southwest Portland. At the tender age of nine, she lost her mother and was raised by her loving father and brothers. She attended both Lincoln and Girls Polytechnic High Schools. At the age of 17, Rose met the love of her life, William (Bill) Cruickshank when he was visiting Portland, from Lawrence, MA. They quickly fell in love so Bill promptly relocated to Portland. They married on November 25, 1950, and had five children. Rose was a beautiful, Italian woman inside and out. She not only had a successful career, she was a phenomenal mother, homemaker and gardener. She was friendly and outgoing and loved spending time with her children and grandchildren. Rose was FUN, FIESTY and FEARLESS! She was a fierce athlete and stacked up to any guy on the ball field. She could “cut a rug” like no other. Rose was preceded in death by husband Bill, brothers Jimmy, Joe, Tony, and Nick Fazzolari, daughter-in- law Margaret Cruickshank. She is survived by her children, Mary Weigant, Toni Hampton, Jackie Beever, Cecelia (Art) Galego, Scott Cruickshank and brother Carlo Fazzolari. She leaves behind 12 grandchildren, 20 great grandchildren (with one more on the way) and 2 great, great grandchildren. Funeral Service will be held Thursday, September 5, 2019, at St. John the Baptist Catholic Church in Milwaukie OR. Rosary will begin at 1:30 pm, followed by a full Catholic Mass Service at 2:00 pm. Family burial will be at Mount Calvary Cemetery on Friday, September 6, 2019, at 12 pm. In lieu of flowers, any offerings in memory of Rose be made to Providence Portland Medical Foundation for Dementia @ appsor.providence.org

Rose Marie (Fazzolari) Cruickshank, age 85, of Milwaukie, OR passed away on August 25, 2019, after a courageous battle with Lewy Body Dementia. Rose was born in Portland, OR on September 26, 1933 to Italian immigrants Salvatore and Mary (Sistini)... View Obituary & Service Information

The family of Rose Marie Cruickshank created this Life Tributes page to make it easy to share your memories.

Send flowers to the Cruickshank family.