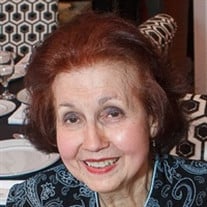 Rosalie Blickenstaff Justen, February 7, 1934-August 24, 2014, was born in Nampa, Idaho, to Dr. Paul and Mrs. Esther Blickenstaff. Early in her childhood, the family moved to Portland, Oregon, where Rosalie was educated in the Portland Public Schools. She attended the University of Oregon, where she received a Bachelor of Music and a Master of Music in piano performance. She became a member of music honorary Mu Phi Epsilon. She then attended the Juilliard School in New York City, where she received a Diploma in piano performance. Rosalie returned to Portland and met Wolfgang Justen, whom she married and with whom she had two daughters. They moved to Houston, Texas, where Rosalie started a private piano studio and became a licensed real estate agent. Rosalie was always active in church music and, while in Houston, played for the Southwest Presbyterian Church. After her return to her Portland roots in 1995, she has played for several churches including the Chinese Presbyterian Church and her current church home, Emmanuel Presbyterian Church. An avid teacher, Mrs. Justen has taught piano at every level, beginner to college, and has maintained a large studio up to her passing. A member of the Oregon Music Teachers' Association, she was a dedicated teacher whose students won many awards. Rosalie also enjoyed gardening, needle arts, and writing for the Jottings Club of Lake Oswego. Rosalie Justen is survived by her daughters Gloria Justen and Gloria's husband Greg Habiby, Ellen-Maria Justen Willis and husband George Willis, her granddaughters Heather and Amber Willis, her sister Anna Marie Beebe, nephew Donald Beebe and niece Maryann Beebe. There is a public viewing at Peake Funeral Chapel on Thursday, August 28th from10AM-8PM. The memorial service is Saturday, August 30th at 1:30 PM at Emmanuel Presbyterian Church in West Linn. Flowers can be sent to Peake Funeral Chapel on Thursday, August 28th, or you may make a donation to Emmanuel Presbyterian Church or the charity of your choice.

Rosalie Blickenstaff Justen, February 7, 1934-August 24, 2014, was born in Nampa, Idaho, to Dr. Paul and Mrs. Esther Blickenstaff. Early in her childhood, the family moved to Portland, Oregon, where Rosalie was educated in the Portland Public... View Obituary & Service Information

The family of Rosalie B. Justen (Blickenstaff) created this Life Tributes page to make it easy to share your memories.