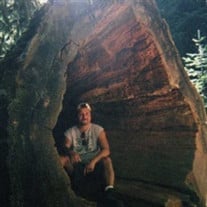 Ronald Armondo Wright was born in Oregon City, Oregon on July31, 1969 to Ronald H. Wright and Alice Wright. He graduated from Oregon City High School in 1987. He owned a small business entitled Wright Tech Drywall Inc. for several years. He worked as a professional drywall applicator in the Portland area his entire life. Ron enjoyed life! He laughed often, loved nature, sports, movies, and music. He had the ability to make any situation a positive one. Ron was a good man both inside and out. He was preceded in death by his Father Ronald H. Wright. and his grandma Jessie Olivar. He is survived by his daughter Felecia, mother; Alice Wright, brothers; Brent, Anthony, Alex, Andy, and Gabrelle, sisters; Yevette and Rachael, grandmother; Delores Valadez, granddaughter; Maya, nieces; Raquel and Madison, nephews; Michael and Mason, all of whom he dearly loved. There will be a Celebration of Life service held at the Milwaukie Elks Lodge # 2032, located at 13121 S.E. McLoughlin Blvd., Milwaukie, Oregon, on Sunday, February 16, at 1:00 PM.

The family of Ronald Armondo Wright created this Life Tributes page to make it easy to share your memories.

Send flowers to the Wright family.