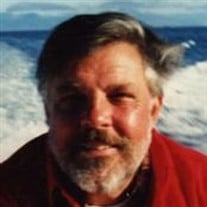 Bob Miller, 73, passed away peacefully, on Sunday, June 24, 2012, while surrounded by his family in his Milwaukie home after a short battle with cancer. Bob was born on September 16, 1938, in Glasgow, Montana to Ruth and Lloyd Miller. He grew up in Bremerton, Washington and transferred to Bellingham High School in his senior year and graduated with the class of 1956. After high school, he attended the University of Washington in Seattle, and while there, he married Janet Nelson. They were wed on November 28, 1959 and have remained so for fifty-two years. While in college, he began sweeping floors for the Crawford Garage Door Company in Seattle. By the end of his business career, he owned the Portland branch of the company. Following his success in the garage door business, he realized his goal of retiring by age 50 when he sold the company in 1988. He spent his retired years focused on his family and a few select hobbies. Bob was an avid fisherman, gardener and owned thoroughbred race horses. More important to him, however, was time spent with close friends and family. In addition to his wife Janet, he is survived by his children, Mindy (Keith) Seher and Mike Miller; his sister, Sandra Messner of Seattle; his beloved grandson, Andrew Seher and many cherished nieces and nephews. A Celebration Of Life will be held on Saturday, July 7, 2012 beginning at 1:00 PM at Risley Landing Gardens, 16195 SE River Forest Place, Milwaukie, Oregon. In lieu of sending flowers, Bob would like you to take a day and do something that brings you joy. If desired, donations may be made to a charity of your choice.

Bob Miller, 73, passed away peacefully, on Sunday, June 24, 2012, while surrounded by his family in his Milwaukie home after a short battle with cancer. Bob was born on September 16, 1938, in Glasgow, Montana to Ruth and Lloyd Miller. He grew... View Obituary & Service Information

The family of Robert "Bob" Miller created this Life Tributes page to make it easy to share your memories.

Send flowers to the Miller family.