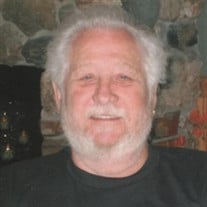 Robert Lee McCoy, "Bob" as he was known to his friends, was born on May 17, 1939 in Nevada, Missouri to his parents Everett McCoy and Leah Rousseau. "Robert Lee", as he was more commonly known to family, had many childhood adventures in the Nevada area with his Rousseau-family cousins who he remained very close with through the years. Robert graduated Wyandotte High School in Kansas City, Kansas in 1958. In April of 1959, Robert enlisted in the United States Marine Corps where he attained the rank of Corporal and was awarded the Marine Corps Good Conduct Medal. Robert was honorably discharged in April, 1965, and continued to be proud of his service and the USMC brotherhood throughout his life. Having returned to the Kansas City area following his tour of service, Robert met and married Carolyn Boswell that same year. They moved to the Pacific Northwest area, ultimately settling in Portland, Oregon, where they had two sons: Culley Ryan, and Kevin Michael. Robert loved the Pacific Northwest, and spent many days camping, fishing, and hunting with family and friends in the mountains, rivers and streams, and forests of the region. Robert entered the electrician trade, and attained the level of Journeyman. During his career, Robert made many life-long friends. He also spent many hours working in many of buildings in the Portland area. In some sections of town, quite literally, you can not travel a city block without passing a building Robert had a hand in. When Robert wasn't on the job, he could be found on his motorcycle ... a true Harley-Davidson man. He spend many hours on the road with friends, and solo, riding his Harley (which he named "Mr. Charlie") across this great nation to rallies and other points of interest. He also made connections the world over as a ham radio operator, and at gatherings with fellow custom van enthusiasts. He was also blessed to have had two great dogs in his life: Butch, a rough and tumble companion who was game for anything; and later, Mosco, an intelligent, pure-bred Siberian husky full of personality. Robert retired as an electrician in June of 2001, and began spending his winters in the warmer climates of southwest Arizona. In the Quartzsite area, he reconnected with existing friends, and made many new ones. During his wintering in Quartzsite, he relished the warmth of the Arizona climate, and spent many hours riding his motorcycle with friends the sunny Arizona highways. His son, Kevin, would take his vacations to join Robert in Arizona for a few weeks each year, and they would spend many days riding quad bikes in the desert terrain and enjoying each others company. He also found joy in four wheeling and rock crawling with local friends. During football season, Robert would spend Sundays rooting for his Kansas City Chiefs Robert also had a great fondness for his Celtic heritage. In 2006 he and his son, Kevin, traveled to Ireland to fulfill his long desire to see the Emerald Isle. Robert passed away on Thursday, August 7th, 2014 in Portland, and is survived by his son, Kevin. His passing was peaceful -- with his son, and close friends, Patty and Mike, at his bedside. He lived an uncompromised life, the way he chose, with few regrets. He had a mischievous, and sometimes wicked, sense of humor which, upon first meeting him, would make people blush, but often would also endear him to them for life. He always made an impression, and left behind family and friends who shall always remember him fondly.

Robert Lee McCoy, "Bob" as he was known to his friends, was born on May 17, 1939 in Nevada, Missouri to his parents Everett McCoy and Leah Rousseau. "Robert Lee", as he was more commonly known to family, had many childhood adventures in the... View Obituary & Service Information

The family of Robert Lee McCoy created this Life Tributes page to make it easy to share your memories.

Robert Lee McCoy, &quot;Bob&quot; as he was known to his friends, was born...

Send flowers to the McCoy family.