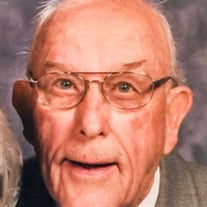 Richard (Dick) Van Zante passed away January 29, 2017, at "A Place To Call Home" in Tigard. He was born, along with his twin brother Bob, May 22, 1926, in Martel, Iowa to Paul and Carmen Van Zante. After serving in the US Armys 786th Tank Batallion in WW 2, he attended Parsons College where he competed on the cross country team and received his business degree. Richard married Marjorie Morton in 1953 after meeting on a blind date in Cedar Rapids, Iowa. His banking career brought them to Oregon where they raised two sons together, Gerrit and Neal. Gerrit preceded his death. As a family, they lived happily in the Garden Home area of Portland. Dick's banking career in Portland lasted 36 years starting with the Multnomah Bank and finishing with Key Bank. His many roles and titles built a broad network of friends and colleagues he was always proud of. He was honored to be a 50+ year Mason, Kiwanis Club member, and an active member of Milwaukie Presbyterian Church. His favorite hobbies in his earlier years were camping, gardening and mushroom hunting. He was a dedicated fan of his grandkids' sports activities. In later years he was quite fond of bicycling, gardening, lawn bowling, and the church choir. Dick loved bicycling, which included trips through Europe and completing the first Cycle Oregon ride in 1988 which was a highlight for him. After his retirement, he and Marge moved to Milwaukie and wintered in Hemet, Calif., where they enjoyed many beautiful years before establishing their latest years of retirement together in Milwaukie. Richard is survived by son, Neal; His sister Betty, and grandchildren, Nicholas, Jordan and Donavan; great-grandchildren , Stella, Riley and Nicholas Jr.. The family wishes to thank each and every friend and caregiver, and a special thank you to the caring staff at "A Place To Call Home" who were so immensely important to Richard in his final years. Donations may be made to Milwaukie Presbyterian Church in memory of Richard Van Zante.

Richard (Dick) Van Zante passed away January 29, 2017, at "A Place To Call Home" in Tigard. He was born, along with his twin brother Bob, May 22, 1926, in Martel, Iowa to Paul and Carmen Van Zante. After serving in the US Armys 786th Tank Batallion... View Obituary & Service Information

The family of Richard O. Van Zante created this Life Tributes page to make it easy to share your memories.