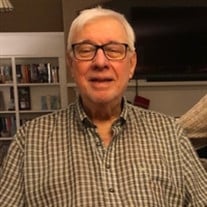 Richard Elliot Enger, 84, of West Linn, Oregon, passed away in his sleep on January 23, 2021. He was born to parents Colonel Edgar and Florence Enger in 1936 in Portland, Oregon. With his father’s career in the army, Richard went to 13 grade schools and 3 high schools. Richard graduated from Curtis High School on Staten Island, New York. After high school, Richard enlisted in the United States Army. His father Colonel Enger swore him in. After the army, he went to drafting school, worked as a draftsman and went on to receive a Bachelors of Science in Urban Studies from Portland State University. He also received a Masters of Library Science from the University of Portland and a Masters of Science in Education (Media) from the Oregon College of Education. Richard spent his career as a librarian at Portland Community College, primarily at the Rock Creek Campus. He retired in 1995.  Richard was married to his first wife, Janet Guyton in 1962 . Their daughter, Lisa, was born in 1967. After Richard’s first wife passed away in 1972, he married a second time to Janet Grenier. He and his family settled in West Linn, Oregon for the remainder of his life. Richard and Janet were married for 48 years. Richard is survived by his wife, Janet Enger, daughter, Lisa Cunningham (Larry), grandkids David Kastelic and Kylee Vahidi (Arrash) and great-grandson, Adrian. Also, surviving Rich is his brother, Charles and his family in North San Diego County.  Richard was an artist, both as a photographer and later creating collages. He developed his own pictures in a home built darkroom and spent many hours enjoying his work. He was associated with 12X16 Art Gallery and many times showed his work. Richard also enjoyed hiking, especially on Mt. Hood. He and his family spent several days hiking the wilderness with packs on their backs. His love of hiking translated through his family to his grandkids. Richard’s other interests included his love of books, storytelling, the Blazers, WWII, bridge and pinochle. After retirement, you could find him at his weekly pinochle game with his buddies or partnering with his wife at the bridge table. Richard loved all of his family, including his cats. He often spoiled them and replaced pictures of his grandkids (after they grew up) with pictures of his beloved cats.  Richard also enjoyed creating experiences for others. He was a member of the West Linn Lutheran Church and the organizer of the 50+ Club, a senior group that went on various outings. Richard spent many years as a mentor for young kids in the North Clackamas School District Buddy Program. He will be remembered as a generous man, giving to charities and organizations that he liked and always helping family members in need.  There will be a memorial service at West Linn Lutheran Church in the future, when it is COVID safe. In lieu of flowers donations may be made to West Linn Lutheran Church or a charity of your choice.

Richard Elliot Enger, 84, of West Linn, Oregon, passed away in his sleep on January 23, 2021. He was born to parents Colonel Edgar and Florence Enger in 1936 in Portland, Oregon. With his father&#8217;s career in the army, Richard went to 13... View Obituary & Service Information

The family of Richard Elliot Enger created this Life Tributes page to make it easy to share your memories.

Richard Elliot Enger, 84, of West Linn, Oregon, passed away in...

Send flowers to the Enger family.