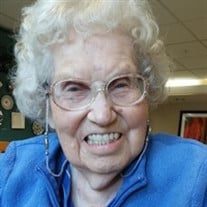 Pearl was born January 8th, 1920 in Baker City Oregon to Alfred Fredrick and Ada Louise Ortloff and was the third of twelve children the couple would have. Pearl passed away on October 19th, 2014 at Marquis Care at Piedmont in Portland OR with family members by her side. On August 17, 1942 Pearl eloped with and married Robert Earl "Bob" Landreth in Weiser, Idaho. They temporarily resided in La Grande, Oregon, relocating to Baker City and had three children. They moved their family to Portland in 1963. Pearl and Bob enjoyed their 50th wedding anniversary with a celebration at the Lake House. Pearl was all about family and loved spending time with her 3 children, 4 grandchildren and 11 great grandchildren plus numerous nieces and nephews, extended family members and friends. Pearl was involved with several fraternal and service organizations including the Rebekahs and the Royal Neighbors of America where, for over 60 years, she held various positions including Oracle. She was an active member with Crossroads Church and worked in retail sales at numerous department stores in Baker City and Portland. Pearl was predeceased by her husband of 56 years, Robert "Bob"; eldest son, Bob; grandson, Ted; sisters Dorothy, Dora, Opal, Lena, Gloria, and brothers Albert, Floyd and Jim. Pearl is survived by her children Sandra Hall [Daniel], Bill [Maria]; daughters-in law Pamela Landreth, Donna Landreth-Phillips [Nick]; grandchildren Tom [Nola], Angi Allen Landreth, Ned Reber [Audrey] and Zac Hall [Cate]; sisters Faye Musslewhite, Jean Stanbery and brother Earl Ortloff; sisters-in-law Velma Ortloff and Sheila Ortloff; 11 great-grandchildren; numerous nieces and nephews; and her extended family. Mom loved them all and they enriched the quality of her life. Services will be held Friday, October 24, 2014, 10:00am at Crossroads Church, 2505 NE 102nd Avenue, Portland, OR 97220. In lieu of flowers and in honor of grandson Ted Landreth, memorial contributions may be made to the Wounded Warriors Project, P.O. Box 758517, Topeka, KS 66675. The family wishes to acknowledge and express appreciation for the loving and nurturing care by all the staff at Marquis Care at Piedmont, Kaiser's Hospice Team, and to Dr. Thomas Harburg for his years of supportive and compassionate care.

Pearl was born January 8th, 1920 in Baker City Oregon to Alfred Fredrick and Ada Louise Ortloff and was the third of twelve children the couple would have. Pearl passed away on October 19th, 2014 at Marquis Care at Piedmont in Portland OR with... View Obituary & Service Information

The family of Pearl Ilene Landreth created this Life Tributes page to make it easy to share your memories.

Send flowers to the Landreth family.