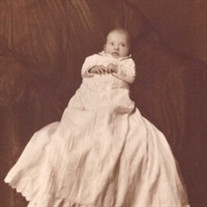 Patricia Barbara Porter Patricia Barbara Porter "Patsy", 99, of Portland, Oregon went to be with The Lord on April 11, 2017 surrounded by family. Patricia was born in Hot Spring South Dakota on October 3, 1917 to Thomas Colgan and Anna Casper Colgan, the first of four children; Arthur, Rita, and Walter. She was raised in Edgemont South Dakota, where she was in the school band and played the saxophone, trombone and piano. After one year of college at Loretto Heights she returned home to marry the love of her life, Rob Ross Porter. Rob and Patricia moved to Tipperary, in Hot Springs South Dakota. After losing their first son at birth, their first daughter Carol Ann was born on December 9, 1939 in Colgan home in Edgemont. In 1940, the family moved to Portland, Oregon where Rob took a job working on the railroad. The family grew to include Barbara Ellen who was born on December 7th 1941, Pearl Harbor Day in a blackout. On October 9, 1947 Thomas Robert was born followed by the twins, Patricia Mary and Michael Ross who arrived on July 30, 1950. Family life centered around the parish at Ascension Catholic Church. Patricia and Rob were active in the parish and youth group service. Patricia served as a leader in Cub Scouts, Camp Fire, and their children attended Ascension Catholic School. In 1960, the family moved to the house on Mt Tabor. Family and friends often gathered to dance and have a good time. Many generations of friends and family gathered at the dinner table for homemade meals, and the door was always open to all, animals included. Patricia enjoyed time at Oceanside, vacationing for two weeks each summer at Kirk's Cottages. Family and friends and a myriad of beloved pets joined her for games of solitaire, rummy, scrabble, crossword puzzles, walks on the beach, shell collecting, and homemade mac and cheese. Dixieland Jazz was always a passion for both Rob and Patricia as they traveled and socialized with the Dixieland Jazz community. Many good memories were made with friends. Rob and Patricia celebrated 50 years of marriage on the River Queen surrounded by loved ones and their favorite, Stumptown Jazz Band. Everyone who knew Patricia knew her for her devotion to family and friends. She was always ready to visit and share with a supportive ear. She never wavered in her commitment. She was a loving wife, mother, grandmother, great grandmother, and friend. Patricia was preceded in death by her husband Rob in 1996 and her daughter Barbara in 2015. Survivors include children; Carol (Gene) Bell of Keizer; Tom (Nancy) Porter of Portland; Patricia (Scott) Daley of Milwaukie; Mike (Judy) of Silverton; ten grandchildren, Rob, Deanna, Kelli, Stephen, Alison, Robert, Amy, Megan, Tricia, and Lisa; and sixteen great grandchildren. A mass of christian burial will be held at 10:30 am on Friday, April 21, 2017 at St John the Apostle in Oregon City. The rosary will be said at 10:00 am prior to the mass. Rite of committal will be at Gethsemani Catholic Cemetery immediately following. In lieu of gifts donations can be made in her name to the Oregon Human Society.

The family of Patricia Barbara Porter created this Life Tributes page to make it easy to share your memories.

Send flowers to the Porter family.