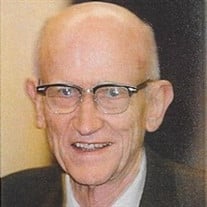 Owen, a life-long resident of West Portland, passed away peacefully on March 23, 2017 with his family at his side. Owen was born June 12, 1918 in Portland and lived over 90 years in the home where he grew up on Dosch Rd. Owen attended Ainsworth Elementary School and graduated from Lincoln High School, class of 1936, He attended Reed College from 1936- 1938, transferred to Oregon State to complete a BS in Forestry in 1941. He served three summers manning forest fire lookouts on mountain tops in the coast range of Oregon. With the advent of World War II, Owen enlisted in the Navy, where he was trained to be a meteorologist at UCLA. He was assigned to the aircraft carrier, USS Netoma Bay and served in combat in the Pacific. His ship survived a typhoon and fought in the battle of the Philippines and went onto Iwojima and Okinawa. His carrier was lightly damaged by a kamikaze plane that hit the foredeck. His ship returned safely to the states in December 1945. Upon returning from the war, he married his college sweetheart, Mildred Maxine Martin, moved into the home where he grew up, and began a family that grew to four sons. He took a job with the Weather Bureau in 1946 and later transferred to the US Forest Service where he conducted research on the relationship between forest fires and weather. His research often took him to field studies in forested mountain terrain where he studied wind and weather patterns. When possible he took his family along to remote areas where they enjoyed camping while Owen conducted research. Additionally he served as the fire behavior officer on forest fires in the Western United States. Owen was a committed family man, always faithful to his wife and four sons. He referred to the family home as the "Side-hill boys farm". He coached Little League baseball, was a Scout Master and was involved in YMCA summer camps. He frequently took his family skiing, hiking and camping and instilled a love of the outdoors and a spirit of adventure in his sons. In 1995 his wife Maxine suffered a stroke and spent the last seven years of her life in a care home. Throughout that time Owen visited her nearly every day and provided strong encouragement to her and all of the care center staff. His long commitment to his wife in sickness and in health was an inspiration to all. During his retirement years one of Owens greatest interests was the field of metaphysics. With the help of a Study Group he sought to understand the interactions of the spiritual and the physical and to use those principles to benefit all. Owen was a strong believer that man-kind should be law abiding and peace-seeking as their highest pursuit. He felt that war was a demonstration of our depravity and that peace was our most admirable state. At the same time he acknowledged that all it takes for evil to prevail is for good men to do nothing. Owen was preceded in death by his oldest son, Greg and his wife Maxine and has been buried near them a Willamette National Cemetery. He is survived by his sons Steve, Doug and Bruce, as well as 6 grandchildren and 6 great grandchildren.

Owen, a life-long resident of West Portland, passed away peacefully on March 23, 2017 with his family at his side. Owen was born June 12, 1918 in Portland and lived over 90 years in the home where he grew up on Dosch Rd. Owen attended Ainsworth... View Obituary & Service Information

The family of Owen Putnam Cramer created this Life Tributes page to make it easy to share your memories.

Owen, a life-long resident of West Portland, passed away peacefully...

Send flowers to the Cramer family.