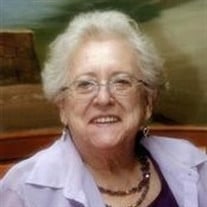 Olga Elizabeth Hannum,82, died Monday, September 12, 2011. She had a wonderful day on Sunday, having gone to Dairy Queen for ice cream and stopped to buy flowers with her family. Liz Hannum died unexpectedly of natural causes at her home in The Springs at Clackamas Woods. Born to George "Bonnie" Butler and Martina Kelley in Richmond, Oregon, Liz grew up in Wheeler and Crook Counties with a country girl's love of nature and life on a rural sheep ranch. In 1946 she graduated from Crook County High School, and after graduation moved to Prineville where she married and had five children: Marsha, Cindy, Kelly, Pat and Connie. After a divorce in 1960, she met the love of her life, Cecil Hannum, and they married in 1962. They first settled in Madras but soon afterwards moved the family to Salem where Liz had another child, Susan. In 1968 Liz and Cec bought the Bend Storage and Transfer Company and relocated the family to Bend where they soon became a part of the business fabric of the community. In 1981, they sold the moving business and retired to a new home in Florence, but held on to their Central Oregon roots in the form of a rustic cabin that Cecil built in the Bend Elks' Haner Park property on the Deschutes River outside La Pine. In 1997, Liz and Cecil sold their Florence house and bought a winter home in Palm Springs and spent the next 8 years "snow birding" between Palm Springs in the winter and their cabin in La Pine in the summer. In 2004, due to Cec's declining health, they sold their condo in Palm Springs and returned "home" to Milwaukie, Oregon so they would be closer to family and friends all the time. Liz loved crocheting, reading, music, theater, travel and helping Cec gradually transform their rustic cabin into a beautiful, modern summer home with all the usual conveniences. Preceded in death by her beloved Cecil, her sister Harriett Rhineschmitt and her brother Sam Butler, she is survived by her 6 children; Marsha Hannum of Milwaukie, Cindy Saunders (Pete) of Silverdale, WA, Steven Hannum of Pittsfield, MA, Patrick Hannum (Ellie) of Salem, Connie Hannum of Eugene, and Susan Alexander (Judd) of Milwaukie. She is also survived by 9 grandchildren: Brandy Hannum, David Saunders, Steven Hannum, Richard Hannum, Josh Demers, Lauren Hannum, Mollie Berry, Michael Hannum, and Sam Berry, as well as 3 great-grandchildren, Ashley and Alex Hannum and Amira Saunders. Service: Noon, September 24th, Milwaukie Covenant Church, 12201 SE Linwood, Milwaukie, OR. Disposition: inurnment. Memorial donations: The Friends of the Milwaukie Center, 5440 SE Kellogg Creek Dr. OR 97222 or the charity of the donor's choice.

Olga Elizabeth Hannum,82, died Monday, September 12, 2011. She had a wonderful day on Sunday, having gone to Dairy Queen for ice cream and stopped to buy flowers with her family. Liz Hannum died unexpectedly of natural causes at her home in... View Obituary & Service Information

The family of Olga Elizabeth Hannum created this Life Tributes page to make it easy to share your memories.

Send flowers to the Hannum family.