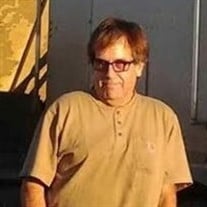 Anthony Nicholas Elich, Jr (Nick) was born December 6, 1957, in Portland, Oregon, to Charlene and Anthony Elich, Sr. Nick died at age 56 on October 27, 2014, after being struck by a car in Williston, North Dakota, while walking across a street. He is survived by his daughters, Angela of Lake Stevens, WA, and Tonya of Fountain Hills, AZ; his mom, Charlene, and siblings, Theresa, Barb, Bill, Tom, and Roseanne, all of the Portland area; and step daughters, Jennifer and Jessica, also of the Portland area. Nick had 9 grandchildren who were truly the greatest pride and joys in his life. Nick attended Cleveland High School and Portland Community College. He was talented in many areas, having worked in construction and was co-owner of Hoffman/Elich Construction, owned and operated Uncle Nick's Pizza, was a car salesman, and most recently was a long-haul truck driver--he traveled the US and bragged about making it to all lower 48 states; but his longest and most memorable position was for Kenows grocery as the refrigeration and air conditioning specialist for all of their storeshe helped a lot of friends and family in that area for decades up to and including the day before he died. In his mid to late 30s, Nick ran approximately 14 marathons and would plan his vacations around where a marathon was taking place. When younger, he enjoyed camping, fishing, snow and water skiing, skydiving, and flight in general. He had his pilot's license and his dream was to own an airplane. He had a great and memorable laugh and the same "Elich" sense of humor as his dad. He will be missed! Nick was preceded in death by his dad, Anthony Nicholas Elich, Sr.

Anthony Nicholas Elich, Jr (Nick) was born December 6, 1957, in Portland, Oregon, to Charlene and Anthony Elich, Sr. Nick died at age 56 on October 27, 2014, after being struck by a car in Williston, North Dakota, while walking across a street.... View Obituary & Service Information

The family of Nick N. Elich created this Life Tributes page to make it easy to share your memories.

Send flowers to the Elich family.