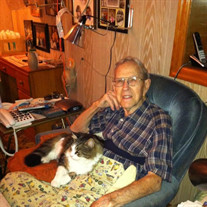 Nels R Olsen (aka Ray), 98, beloved husband, father, grandfather, brother and friend, went home to be with his Lord and Savior on Monday, July 26, 2021. He passed peacefully surrounded by his loving family. Ray was born to the late Anna and Hans Olsen on November 18, 1922 in Crosby, North Dakota. Ray spent his early years on a farm in Noonan, ND before moving to Coteau, ND. He was raised with his brother and sister. Ray graduated from high school in 1940. After graduation he joined the Civilian Conservation Corps and in 1941 moved to Fargo, ND to attend welding school. In 1942, after the bombing of Pearl Harbor, Ray moved to Seattle, WA to continue his welding work in the Navy Shipyard located in Bremerton, WA. In the spring of 1942, Ray enlisted in the Army and was sent to Clayborne, Louisiana for basic training. He ultimately was assigned to the 2751st Heavy Shop Company. In 1943 his Company was stationed on Guam. In 1945, after the war, Ray was discharged from the Army and moved back to Seattle. In 1946 Ray met and married his wife, Mary. In 1955 they moved to Portland, Oregon where, together, they raised their five children. Ray was always an active member of his church. Ray loved photography, bowling and playing pinochle. In high school he was a star on the track team, as well as playing basketball. He enjoyed hunting, golf and could pitch a mean game of horseshoes. Ray is survived by his five children Lylla Gaebel, Larry and (Louise) Olsen, Linda Hill, Lorna and (Randy) Brem, and Lynn and (Kurt) Bauer. He is also survived by sixteen grandchildren, twenty-four great-grandchildren, six great-great grandchildren and numerous nieces and nephews. Ray was preceded in death by his wife Mary, brother Roland, sister Betty, and four grandchildren. Private services at Willamette National Cemetery are scheduled for August 19, 2021. A public memorial is scheduled for Friday, August 20, 2021 at 1 p.m. to be held at Victory Outreach Church, 16022 SE Stark St., Portland OR 97233

Nels R Olsen (aka Ray), 98, beloved husband, father, grandfather, brother and friend, went home to be with his Lord and Savior on Monday, July 26, 2021. He passed peacefully surrounded by his loving family. Ray was born to the late Anna and... View Obituary & Service Information

The family of Nels Raymond Olsen created this Life Tributes page to make it easy to share your memories.

Send flowers to the Olsen family.