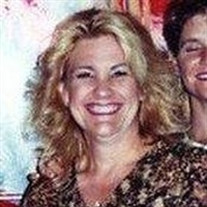 Beloved wife, daughter, sister, aunt and friend, Megan Joy (Rabska) LaFlamme, was unexpectedly called home Friday, September 9, 2011 in Portland, OR. Megan was born in Santa Maria, California at Sisters' Hospital on January 19, 1960 to Mary Lou Cunningham and the late Reinhart J Rabska. She was raised in Santa Maria attending Miller Street School, Fesler Junior High School, and Santa Maria High School. In high school, Megan excelled as a student, was active in school government, sang in the Madrigals and was also the school mascot, "Samantha Saint." While growing up, the family would go to the Rabska Homestead in Meeker, Colorado every summer for vacation. The homestead was 640 acres and 14 miles outside of town. Megan learned to fish and make peanut butter fudge on the wood burning stove. In the evenings, the family would play Yahtzee, of which Megan was one heck of a great player. In fact, she was very competitive. Megan graduated from Allan Hancock College in 1980 and transferred to her father's alma mater, Fresno State. She graduated with a Bachelor of Arts degree in Business Administration 30 years to the day after her father in June 1982. While in school, she paid part of her expenses by working for a State Farm agent. She had learned her State Farm Insurance skills from the ground upfrom office cleaning on Saturday mornings to working in the office helping her father's policyholders. After graduation, she moved to Hemet and was employed by Automobile Club of Southern California. It was in Hemet that she purchased a scratcher lotto ticket and won a $50,000 jackpot. With her winnings she bought her first home. After her stint in insurance, she decided to go back to school to get her teaching degree. With that decision made, she moved back to Santa Maria and commuted to Cal Poly for the credentialing program. Megan moved to Bakersfield for her first teaching assignment in Mc Farland. She taught junior high for seven years, then got a teaching job in Santa Maria for two years. Reaching her 40th birthday, Megan decided to launch a new life in Portland, OR. Using her computer skills, she secured a job and packed her little Honda Accord and off she went on her new adventure. Megan worked for awhile as a temporary employee and was hired by Louisiana Pacific Lumber Company in 2003. At the time of her death, Megan was working in the tax and law division of LPL in Portland. On a pleasure trip in 2004 she met her husband to be, Alan Maurice LaFlamme. After a brief courtship, Alan and Megan were married on May 28, 2005 . Megan had many passions in life and definitely had an artistic flair. She loved her animals. Some of her hobbies were cooking, reading, card making, and cross stitch. Megan was quick to smile and lit up the room. She made you feel comfortable. She had so many everlasting friendships. And we cannot forget about her computer usage. Megan is survived by her husband, Alan LaFlamme of Portland, OR; stepchildren Alan David LaFlamme; Gary Robert LaFlamme; Mark Harrison LaFlamme, and Michelle Yvonne LaFlamme;Vincent Michael Williams; mother, Mary Lou Rabska; sister, Tami Rabska; nephew, Nathan Williams all of Santa Maria,CA; niece, Cori Williams Bell, of San Miguel,CA ; and aunts, uncles and many cousins. Two memorial services will be held. The first service will be held in Oregon at Peake Funeral Chapel, 1925 SE Scott, Milwaukie, OR (503)654-7755, on Thursday, September 15th, 2011 at 11 a.m. Please be sure to visit the website www.peakefh.com. The second service will be held at Dudley Hoffman Mortuary, 1003 East Stowell Road, Santa Maria, on Sunday, September 18, 2011 at 1:00 p.m. In lieu of flowers, in recognition of Megan's love of animals, memorials may be made to Santa Maria Valley Humane Society, 751 S Black Road, Santa Maria, CA 93458 or to your favorite charity.

The family of Megan Joy Rabska~LaFlamme created this Life Tributes page to make it easy to share your memories.

Send flowers to the Rabska~LaFlamme family.