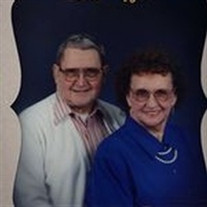 Mary Ellen Shaw died Saturday at the age of 75. She died at home with family around her praying the Lord's Prayer. She had battled cancer for the last year and a half. She expressed that she knew she was going to pass on and looked forward to seeing those who had gone before her, including her son Robert and brother-in-law, Walt. She smiled every day with sincere happiness. She loved Jesus. Born Mary Ellen Johnson, in Southern California, she grew up on a farm, the oldest of eight children. She found joy and freedom in talking to her cows and other animals, who were friends to her. She even had a baby lamb that would sleep on her bed. This last week when we asked her if her life was truly happy she said, "Yes". When asked "Were you always happy?", she said, "Well, no, not on the farm- I was happy once I met Dad, though...and ever since." Mary first saw her husband at West Linn High School as a 14 year old girl. It was love at first sight and she was immediately determined to marry him. After time served in the Airforce, Harry Donald Shaw did marry her and they lived in California. They were connected with the community and others on the military base nearby. Soon a neighbor girl named Susie, who became their first foster child, came to live with them. The door of the Shaw household was never closed to those in need from there on out. The Shaws moved back to Portland, Oregon and had their own children Myron and then Robert. During these years Mary worked for the post office, volunteered as a Sunday school teacher and stayed busy in many tasks for the family. More foster children came through their doors- well over one hundred children, mostly very young ones. It was in the late 1960s they began to want a daughter. Twin infant foster girls came to the Shaws around that time. One of the twins grew sick and died and Mary and Harry saw fit to cover the cost of the grave and tombstone for little Annemarie. If someone had nowhere to belong, Mary would often lay claim to people with love. Annemarie's sister Rosemarie survived her and at the age of 4 was adopted officially as the daughter of Harry and Mary. Many others as well feel the family connection to the Shaws deep in their hearts to this day, including foster children Susie, who has remained lifelong friends with Mary, Shauna who lives in Oregon City, and Rick who has always been the baby of the family. The family spent vacations in a bus revamped into an RV, driving across the nation. Neighborhood events revolved around the house. Mary was at Harry's side in all these activities and they had great family fun. Mary was a gem among women and she loved to look forward to good things rather than look back to the bad. She had many stories to tell and was always there for her kids. Mary loved Harry a lot and even into the final year of her illness, she loved him very much and they watched out for eachother. Mary liked to watch variety shows like "The Bachelor"and Fox news as well this past year, concerned for the future of the nation and the welfare of the people.. Mary was preceded in death by her son, Robert and also by her granddaughter, Anna, who she loved very, very much. She is survived by husband Harry, 79, of Milwaukie, son Myron and his wife Tamra of Vancouver, Washington, daughter Rosemarie and her husband Andrew of Milwaukie. Also she is survived by two brothers and four sisters. Mary had 9 grandchildren and 4 great-grandchildren. Services for Mary Ellen Shaw will be at 12 noon at the Peake Funeral Home Chapel in Milwaukie. Graveside service will follow. The family requests that donations be made to Cancer Society in remembrance of her.

Mary Ellen Shaw died Saturday at the age of 75. She died at home with family around her praying the Lord's Prayer. She had battled cancer for the last year and a half. She expressed that she knew she was going to pass on and looked forward to... View Obituary & Service Information

The family of Mary Ellen Shaw created this Life Tributes page to make it easy to share your memories.

Mary Ellen Shaw died Saturday at the age of 75. She died at home...

Send flowers to the Shaw family.