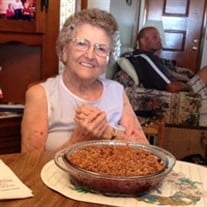 Mary H Olsen, 89, beloved wife, mother, grandmother, sister and friend, went home to be with her Lord and Savior on Tuesday, November 26, 2013. She passed peacefully surrounded by her loving family. Mary was born to the late Gerda and Aksel Sorensen on August 17, 1924 in Gerler, Denmark. Mary moved to the United States in 1925. She was raised on her family's farm near Arlington, SD with her five siblings where she learned to ride horses and appreciate life outdoors. Mary graduated from high school in 1942 before moving to Seattle, Washington with her parents and siblings. She then went to work for the Boeing Company. In 1946 Mary married the love of her life Nels R Olsen. In 1955 they moved to Portland, Oregon where, together, they raised their five children. Mary was always an active member of her church and was the leader for her children's Bluebird and Campfire groups. Mary loved sewing and made clothes for her children when they were young. Mary also loved reading, embroidery, flowers and gardening. She has an extensive salt & pepper shaker collection. Mary's favorite songs were How Great Thou Art, One Day at a Time and Going Home. Mary loved pumpkin pie. Mary is survived by her loving husband of 68 years Nels R Olsen. Her five children Lylla and (Jim) Gaebel of Warrenton, Oregon; Larry and (Louise) Olsen of Pasco, Washington; Linda Hill of Portland, Oregon; Lorna and (Randy) Brem of Newberg, Oregon; and Lynn and (Kurt) Bauer of Gresham, Oregon. She is also survived by seventeen grandchildren, twenty great-grandchildren, three great-great grandchildren and numerous nieces and nephews. Mary was preceded in death by her two brothers; Chris Sorensen and Egan Sorensen, her three sisters; Ella Eggers, Rosie Kimmel and Esther Steffen, and three grandchildren. Funeral services were held on Friday November 29th at Gable Funeral Chapel in Portland, Oregon.

Mary H Olsen, 89, beloved wife, mother, grandmother, sister and friend, went home to be with her Lord and Savior on Tuesday, November 26, 2013. She passed peacefully surrounded by her loving family. Mary was born to the late Gerda and Aksel... View Obituary & Service Information

The family of Mary Hyllsted Olsen created this Life Tributes page to make it easy to share your memories.

Send flowers to the Olsen family.