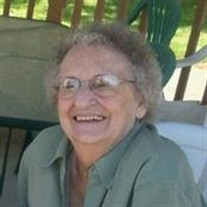 Mass Of Christian Burial will be held at 12:30 PM, Wednesday, September 5, 2012 in St. John The Baptist Catholic Church, 10955 SE 25th Ave., Milwaukie, OR. 97222. A private interment will follow in Lincoln Memorial Park, Portland, OR. Marilyn was born the middle of three children in Seattle, Washington to George A. and Juanita Goode. She was raised in the Portland, OR area but as a teen lived in Los Angeles, CA and attended Hollywood High School. She worked as a secretary at KTTV Studios where in the early 1950's television programs such as Perry Mason were filmed. She met her future husband Frank A. Johnson through mutual friends. Marilyn and Frank married in 1953, and she devoted the rest of her life to Frank and their children. Marilyn passed away after a short illness. She was preceded in death by her parents, her husband Frank, her brother George Goode Jr., her nieces Marilyn Goode, Barbara Dietz and her husband Bill, and her nephew Jason Barbour. She is survived by her five children: Laureen Hancock and her husband Michael of Spotsylvania, VA., Edward, Scott, and Karen all of Anthem, AZ., and Curtis of Milwaukie, OR. There are four grandchildren; Kellan, Mary Catherine, Laura and Joseph. Her younger sister Carol Barbour and spouse Don of Salem, OR. Nieces and nephews; Jeff Barbour, Jason and Shawna Dietz, and Kelley Stichler. For those who wish contributions may be made to; St. Jude Children's Research Hospital in her memory.

The family of Marilyn Jean Johnson created this Life Tributes page to make it easy to share your memories.

Send flowers to the Johnson family.