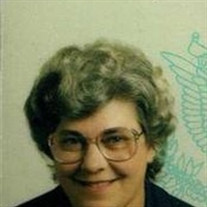 Marian Elizabeth Kozak Oberg, 78, a resident of the Milwaukie community died at her home on Saturday, April 30, 2011 following a brief illness. A Celebration of Life Service will be held Saturday, May 28, 2011 from 1:00 pm to 3:00pm at the Milwaukie Senior Center, 5440 SE Kellog Creek Drive, Milwaukie, Oregon, 97222. Friends and Family are invited to attend a reception immediately following the service. Private Cremation Rites have been held. Marian Elizabeth Kozak Oberg was born March 2, 1933 in Boise, Idaho to the late Joseph and Eula Vinson Kozak. She was raised and educated in the Boise community having graduated from Boise High School in 1951. Marian was the only girl of eight children. She grew up surrounded by seven brothers. Following her education she joined the US Naval Reserves and traveled to Maryland to attend her training. During this time she worked at the airport where she placed the material coatings on the wings of the planes as well as completing her flight hours for her pilots license. Marian was always active in sports and the on Rifle Team. Marian attended Boise State Junior College where she studied Art. In 1955 Marian moved to Portland, Oregon where she began playing semi-professional Softball on the Erv Lind Team. While she was on the team she met her husband, Harvey Oberg. She was united in marriage to Harvey Oberg on April 15, 1967 in Portland. They celebrated nineteen years of life together before he preceded her in death in 1986. Marian was a 'dot etcher' in the lithography process used in many different media productions. She worked for thirty-nine years in the printing field at Trade Litho. She was also a master gardener. She loved art and enjoyed painting with both oil and water colors. Marian liked to travel and visited many other countries over the last twenty years. She considered herself a "rock hound" and liked to play golf, however, Marian's true love was spending time with her family, and going to her nephews and grandnephews sporting events. She rarely missed one. Marian was preceded in death by six brothers; Vern, Carl, Frank, Bill, Earl and Gene. Survivors include her brother and sister in law, Al and Janet Kozak of Madras, Oregon, two nephews; Scott and wife Kim Kozak of Oregon City, and Kyle Kozak of Hillsboro, Oregon, nephew; Blaine Kozak, niece; Marcella Kess, great nephews; Kody and Ryan. The family suggests remembrances may be contributions made to the American Cancer Society, Portland, Oregon in her memory. Services have been entrusted to Peake Funeral Chapel. Please check back for photos and updates.

Marian Elizabeth Kozak Oberg, 78, a resident of the Milwaukie community died at her home on Saturday, April 30, 2011 following a brief illness. A Celebration of Life Service will be held Saturday, May 28, 2011 from 1:00 pm to 3:00pm at the Milwaukie... View Obituary & Service Information

The family of Marian Elizabeth Kozak Oberg created this Life Tributes page to make it easy to share your memories.

Marian Elizabeth Kozak Oberg, 78, a resident of the Milwaukie...