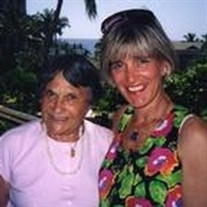 Madeline J. Brown, a resident of the San Carlos community, died Wednesday, April 6, 2011 at the Sequoia Hospital in Redwood City, California of natural causes. Recitation of the Rosary will be held Tuesday, April 12, 2011 at 10:30 am at St. John The Baptist Catholic Church, Milwaukie, Oregon followed by a Memorial Mass with Father Maxy D'Costa as celebrant. Private Burial Rites will be held at Willamette National Cemetery in Portland, Oregon. Madeline J. Brown was born June 24, 1917 in San Francisco, California to Desiderio and Antonia Bravo Catalan. She was raised and educated in Oakland and San Francisco. Following her education she attended secretarial training. Madeline's husband was Alfred "Lee" Brown. Lee preceded her in death several years ago. She was employed by the Southern Pacific Railroad for almost forty years. Among her personal interests she enjoyed knitting and crocheting. She was known as "Grandma Cookie" by her grandchildren. She liked to travel and over the years was able to visit many different countries. She was preceded in death by her son, LeRoy Holley, her husband, Lee, her sisters; Clara Chaney, Dolores Black, brother, Anthony Catalan. Survivors include her daughter and son in law, Antoinette and Richard J. Guasco of Portland, Oregon, four grandchildren; Richard A. Guasco, Stephen P. Guasco, Jon L. Guasco, and Michael Holley, daughter in law, Janice Holley, as well as seven great-grandchildren. The family suggests that remembrances maybe contributions made to the Diabetes Association, or St. John the Baptist Grade School or Central Catholic High School in her memory. Please continue to check back for information and photo updates.

Madeline J. Brown, a resident of the San Carlos community, died Wednesday, April 6, 2011 at the Sequoia Hospital in Redwood City, California of natural causes. Recitation of the Rosary will be held Tuesday, April 12, 2011 at 10:30 am at St.... View Obituary & Service Information

The family of Madeline J. Brown created this Life Tributes page to make it easy to share your memories.