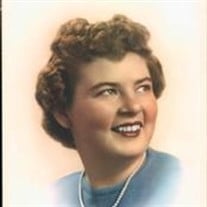 Macel Laverne Silva (November 18, 1933 - November 1, 2011) Macel Laverne Silva,77, a resident of the Milwaukie community died Tuesday morning, November 1, 2011 surrounded by her family. A Funeral Mass will be celebrated Tuesday, November 8, 2011 at 12 Noon at St. John the Baptist Catholic Church with Reverend Maxy D'Costa as Celebrant. Family and friends are invited to a reception following the mass. Graveside Service will be held at 2:00 PM on Wednesday Nov. 9th, at Willamette National Cemetery in Portland, Oregon. Macel Laverne Ford Silva, or Laverne as she preferred to be called, was born November 18, 1933 in Sayre, Oklahoma in a small community called Turkey Creek. Her parents were the late Lathan Ross and Cullie Mathews Ford. Her family moved to many small communities in Oklahoma, California, and Oregon during her childhood and teenage years. She graduated from Perrydale High School, Rickeall, OR in 1951. Laverne met her future husband Abel while he was stationed at Tillamook, OR in the Air Force. They were united in marriage on July 17, 1954 in Salem, Oregon. Together they raised six children and celebrated fifty-six years of life together. Laverne is preceded in death by her husband Abel Joseph Silva who passed away on August 31st of this year. They moved to Puerto Rico for a year shortly after they were married, then they moved to the Santa Clara Valley, CA where she received her Bachelors and Masters Degrees in Business Management from San Jose State University before completing a Phd. in Business at California Western University. She taught business and accounting courses at the Community College and San Jose State University. She also owned and operated her own business offering billing, business accounting, tax preparation and consulting services. Laverne and Abel also owned and operated Silva's Hobbies and Crafts in San Jose, CA where she taught several craft classes. Among her personal interests she loved crossword and jigsaw puzzles. The family took many a camping road trip including up to Alaska on the old gravel Al-Can Highway in a camper with six kids. The stories from some of those trips are hilarious. She enjoyed knitting and made sweaters for many of the family members. In 2000 Laverne and Abel relocated to Milwaukie, OR to be near family. Laverne's youngest son Christopher lives with his wife and three daughters; Stephanie, Abigail and Emily in Gresham. Survivors include her five sons and daughters in law; William of Nunica, MI, Steve and Donna of Carson City, NV, James of Sunnyvale, CA, David of Nunica, MI, Christopher and Erin of Gresham, OR, and daughter and son in law, Diane and Mitch Hart of Modesto, CA., two brothers and sisters in law; Calvert and Patty Ford of Morgan Hill, CA, Eldon and Linda Ford of Benton, LA, and sister in law Betty Ford of Garland, TX. Also surviving are eighteen grandchildren and eight great grandchildren, as well as many nieces and nephews. She was preceded in death by her brother, Fayburn. The family suggests that remembrances may be contributions to any charity that benefits children and education. Please check back for photo updates.

The family of Macel LaVerne Silva created this Life Tributes page to make it easy to share your memories.

Send flowers to the Silva family.