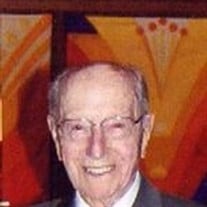 Cowan, Louis J. 100 09/19/1908 03/20/2009 Louis J. Cowan passed away March 20, 2009. Born over 100 years ago on Sept. 19, 1908, in Walla Walla, he lost his father at the age of 4, and he and his brother moved to Portland with their mother and her second husband in 1920. Lou graduated from Jefferson High School and the following day, along with four of his friends, celebrated by climbing Mount Hood. In Lou's words, they had no special equipment and were both foolhardy and lucky. Lou attended business college and went to work in the accounting department of SP&S Railroad. The Depression brought an end to his job in 1932. He married Rose VanDoozer in 1935. Their wedding, part of the Pacific Northwest Florist Convention, was held in Portland's Civic Auditorium. Portland's former mayor gave the bride away and the city's current major was Lou's best man. It was quite an affair, attended by 3,000 guests. Lou joined the Army Corps of Engineers in 1942, and joined the Army in 1943 following graduation from Officer Candidate School.When Lou was 33, he was involved with one of the major events ending World War II against Japan. He previously had applied, after basic training, for OCS at Fort Belvoir and was commissioned a second lieutenant in the Combat Engineers. This was the beginning of a super secret assignment in Los Angeles where all military personnel wore civilian clothes. He was assigned civilian living quarters for him and his wife in the Grace Manor. His work was so secret he could not even tell his wife. He was associated with many people including driving the staff car for the head scientist, Fermi, and General Groves, the commander who coordinated the development of the Manhattan Project and the test of the atomic bomb in Alamogordo, N.M. In addition to his other duties, Lou's work was arranging transport with Railway Express for the two atomic bombs from the Los Angeles area in 1945 to waiting ships, one of which was the cruiser Indianapolis, in the San Francisco area. They were then shipped to the Mariana Islands and the B-29 base where they were loaded on the now famous Enola Gay aircraft for a mission to drop the first atomic bomb on Hiroshima, Japan. It was followed by another atomic bomb (Fat Man) dropped on Nagasaki. Lou and his first wife were divorced in 1954, and two years later he fell in love with Beulah Carter. They were married in 1956. They worked together at BPA where they were each rewarded the Silver Medal for their work. They enjoyed boating for many years, belonged to two yacht clubs, and Lou became commander of the Coast Guard Auxiliary. Following their retirement in the early '70s, they enjoyed traveling by motor home and spent the next 20 winters in Tucson, Ariz. Lou lost Beulah to Alzheimer's in June 2004. Not one to allow life's challenges to get him down, Lou found love again at the age of 96 and married Joyce Schwab. Many friends helped them celebrate the occasion along with their wedding anniversaries and Lou's 100th birthday party. Lou is survived by his loving wife, Joyce; nieces, Wilver Hubbard and Nicole Stauffer; nephew, Jed Langley; and friends too numerous to count. He will be greatly missed by all who knew him. Services will be held at 1:30 pm inside Willamette National Cemetery Friday, March 25th. A Memorial will follow the graveside at 3 pm at St Paul's United Methodist Church in Milwaukie, Oregon.

The family of Louis Cowan created this Life Tributes page to make it easy to share your memories.

Send flowers to the Cowan family.