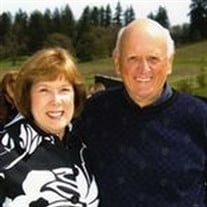 Larry Valentine Valentine, Larry 80 1/25/1930 4/3/2010 Larry Valentine passed away April 3, 2010, at age 80. He was born in West Haven, Conn., Jan. 25, 1930, and spent his youth there. He served in the U.S. Army during the Korean War and was stationed on Okinawa. He met Rosemary Walbert in 1959. They were married in November of that year, and he became Dad to her two children, Billy and DeeDee. Larry and Rosemary were married for 36 years when she died in 1996. In 1974 Larry became a grandpa to Kristen and then again in 1985 when Kyler was born. In 1992 Larry became a partner in Dialysis Equipment Registry, a brokerage company that he became sole owner of in 1998. He continued in that business until his retirement, working from home wherever home was: Gold Canyon, Ariz.; Apache Junction, Ariz.; or Milwaukie. In June 1997 Larry met Janet McCafferty. Larry became, as those who knew him would expect, an integral part of Jan's family. Larry loved his family and friends, and thought his grandchildren were the most marvelous people he knew. He loved fly fishing, airplane piloting, paragliding at Torrey Pines or sea kayaking, all avocations he started after age 67. Larry was an avid fisherman most of his life, but developed a passion for golf, and his golf buddies. He also took up fly fishing in recent years and enjoyed fishing with his grandson. When Larry was younger, he was a ski instructor in Vermont and a competitive skeet shooter in Connecticut. Larry is survived by his fiance, Janet McCafferty and her family; daughter, Diedrie Fitch, and son-in-law, Walt; granddaughter, Kristen Asthenidis (George); grandson, Kyler Fitch (Sarah); sister, Barbara Hulk; brothers-in-law, Dr. Frank Harmon (Judy) and Rick Harmon (Majel). He was preceded in death by his wife, Rosemary; and son, Bill Walbert. He leaves scores of friends whom he loved and enjoyed. All who knew him will miss him. Services will be held at 2 p.m. Sunday, April 11, 2010, in Oregon City Christian Church. Memorial contributions may be made to the American Lung Association of Oregon in care of Peake Funeral Chapel.

The family of Lawrence N. "Larry" Valentine created this Life Tributes page to make it easy to share your memories.