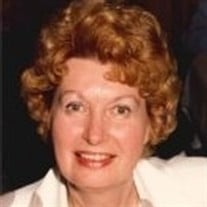 LaVerne was born in Howells, Nebraska, on March 18, 1921, to Ben and Rose Schlecht. She was the fifth of seven children. In the spring of 1935, her parents sold their farm and headed for Oregon, settling in Woodburn. Two years later, LaVerne moved to Portland and took a job as a delivery girl for a wholesale jeweler. That was the beginning of a career that spanned 52 yearsat a time when it was unfashionable for women to have careers at all. She was a smart, savvy businessperson and retired in 1990 as a Vice President with Simon Golub & Sons. In 1944, LaVerne married Lee Holder, and their daughter Karen was born four years later. Lee died in 1979. LaVerne began the happiest chapter of her life when she fell in love with Carl Schroeter, and they married in 1983. The two of them conquered the world together, trailering across the US and making annual trips to Europe. For LaVerne, planning the trips was almost as much fun as going on themand nobody loved France more than she did. When health issues slowed them down, LaVerne and Carl stayed closer to home, family, and friends. She and her daughter Karen always were close, but LaVerne also loved her nieces and nephews and was like a "second mother" to several of them. She had a special gift with people, an irresistible friendliness, a wonderfully jolly sense of humor, and a bright outlook even when times were tough. LaVerne is survived by her loving husband, Carl Schroeter; her devoted daughter and son-in-law, Karen and Roger Miller; her brother, Eugene Schlecht; and the many nieces and nephews who gave her so much joy. In a memoir she wrote when she was 80, LaVerne said, "Looking back, I am especially thankful for a job I loveda sensitive and caring daughterthe opportunity to traveland spending my twilight years with Carl." She was a beautiful woman, inside and out, and we miss her more than words can tell. A memorial service is planned for 2:00 p.m. on Thursday, July 25, 2013, at Peake Funeral Chapel, 1925 SE Scott Street, Milwaukie (www.peakefh.com). In lieu of flowers, please consider a contribution to Moreland Presbyterian Church in Portland.

LaVerne was born in Howells, Nebraska, on March 18, 1921, to Ben and Rose Schlecht. She was the fifth of seven children. In the spring of 1935, her parents sold their farm and headed for Oregon, settling in Woodburn. Two years later, LaVerne... View Obituary & Service Information

The family of LaVerne Ruth Schroeter (Schlecht) created this Life Tributes page to make it easy to share your memories.