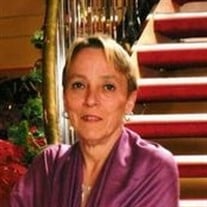 LaLonie Kay Brown, 55, a resident of the Gladstone community died Wednesday, March 9, 2011 at her home following a lengthy illness. A Celebration Of Life Service will be held on Saturday, March 19, 2011 at 2:00 PM at the Grace Point Baptist Church, 10750 SE 42nd Ave. Milwaukie, OR 97222, with Chaplain Loren Fischer officiating. LaLonie believed in medical education and she donated her body to the OHSU School Of Medicine Program in Portland. Private cremation will be held following the study program. LaLonie Kay Brown was born June 2, 1955 in North Bend, Oregon. She was raised and educated in the Coos Bay area having attended Marshfield High School. LaLonie and her husband James Brown met on a blind date and they were married 4 months and 10 days later, on March 17, 1973 in Coos Bay, Oregon. They celebrated just short of thirty-eight years of life together and raised three children; James Brown, Jr. born 11/29/1974 in Monterrey, CA; Sheila Ray, born 8/19/1976 in Seattle, WA.; and Jeremiah Brown born 1/2/1979 in Adak, AK. She married a military man and they moved around over the years. LaLonie worked as a medical care giver in the hospitals in many of the areas where she lived, including Coos Bay, Oregon, Adak, Kodiak and Sitka, Alaska, California and Washington and most recently in Gladstone, until her health issues caused her to retire. After becoming severely ill, Lonie was told she had used up her nine lives but she told the Doctor she still had three cats at home! She enjoyed taking care of others, was compassionate and loving, and exceedingly givingif she had it to give, she did. Among her personal interests she loved being out in the snow. She liked to go fishing and caught a record breaking 218 pound Halibut on a July 4th fishing trip in Sitka. LaLonie was a member of several car clubs, Sunset Classic Chevys in Coos Bay and Trick and Racey Cars in Oregon City. She enjoyed reading and was a great cook. Her greatest hobby was her grandchildren. LaLonie had a special place in her heart for all animals including her many cats, dogs, and two pet skunks. Survivors include her husband James "Jim" M. Brown Sr., her parents, Jerry Stiltner of Coos Bay, OR, and Barbara Williams of Eugene, OR., two sons and daughters in law; James Jr. and Rhonda Brown of Johnson City, Jeremiah and Melissa Brown of West Linn, daughter and son in law; Sheila and Travis Ray of Bellingham, Wa, a sister Dora Mills of Gladstone and a brother, Dan Stiltner of Eugene. Also surviving are ten grandchildren; Victoria Brown, James Brown III, Jordan McGee, Kayla Ray, Devin Ray, Kyah Ray, Seth Brown, Jennifer Brown, Alyssa Brown, and Alexis Brown; Mother-In-Law, Phyllis Brown. There are many nieces, nephews, great-nieces and great-nephews. The family requests that remembrances be memorial contributions made in her memory to the Childrens Muscular Dystrophy Association, 4800 SW Macadam Ave. #205, Portland, Oregon 97239-3928. Services are entrusted to Peake Funeral Chapel, 1925 SE Scott Street, Milwaukie, 503-654-7755 and obituary and tributes available @ www.peakefh.com.

LaLonie Kay Brown, 55, a resident of the Gladstone community died Wednesday, March 9, 2011 at her home following a lengthy illness. A Celebration Of Life Service will be held on Saturday, March 19, 2011 at 2:00 PM at the Grace Point Baptist... View Obituary & Service Information

The family of LaLonie Kay Brown created this Life Tributes page to make it easy to share your memories.

LaLonie Kay Brown, 55, a resident of the Gladstone community...