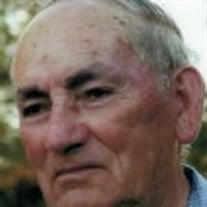 Kenneth Lee Shelton Kenneth Lee Shelton, 89, a resident of Oregon City died Sunday, January 30, 2011 at his home following a brief illness. Graveside Services will be held Thursday, February 3, 2011 at 11:00 AM at Willamette National Cemetery, Portland, Oregon. Military Honors will be conducted by the Oregon Military Funeral Honors Team. Kenneth Lee Shelton was born August 1, 1921 in Webb City, Missouri to Harv and Sarah (Sullians) Shelton. He was raised and educated there. Ken joined the US Army in September of 1944 and served until May of 1946. He worked for a short time in the shipyards in California. Kenneth was united in marriage to Mary Nimmo on September 28, 1947 in Missouri. They shared sixty-three years of life together and raised three children. Over the years Ken worked in carpentry, starting with hardwood floors. He joined the local Carpenters Union # 738. He moved his family to Oregon in 1948, working in the housing and commercial carpentry. Ken was part of the team that built the Clackamas Town Center Mall. Among his personal interests he enjoyed playing pool as a young man. His winnings of ten cents got him into the movies on several occasions. He loved to go fishing, he took Mary out to go bowling and golfing. They did do some traveling to see the friends and family in Missouri. They went to Hawaii and on a cruise to Alaska, but the most impressive trip was to Washington DC to see the WWII War Memorial that was completed just before they were there. Ken was preceded in death by three brothers, two sisters, and his son, Harvey Lee Shelton in 2000. Survivors include his wife Mary, son and daughter in law; Kenneth Stephen and Nadine Shelton, Portland, Denise Thomas of Henderson, Nevada, Also surviving are four grandchildren and six great grandchildren. Services entrusted to Peake Funeral Chapel, 503-654-7755, www.peakefh.com for info and tributes.

The family of Kenneth Lee Shelton created this Life Tributes page to make it easy to share your memories.

Send flowers to the Shelton family.