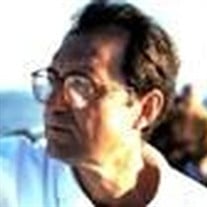 Joseph, beloved husband, father and grandfather passed away at home Tuesday, Sept. 18, 2018, after a long illness.He was born June 13, 1945, in Siracusa, Sicily, to the late Alfonso and Clara Macca. At age five, his sister Gaetanina was born but passed away as an infant. In 1956 he and his parents emigrated to Portland where Clara and Alfonso built a successful alterations business. Joe often spoke of how he was the translator for his parents from an early age. He was a doting son who cared for his parents until their last days. Joe attended Central Catholic High School and then went on to study architecture at The University of Oregon where he earned his architecture degree in 1969.While at U of O, Joe played on the varsity soccer team and was a lead scorer. While attending college, he met Christine Ellen Bates. They fell in love and were married in June of 1969. Their son Joseph "Joey" Alfonso was born in 1970, and their daughter Carrie Ellen was born in 1975. Joe designed and built a home for the family in Lake Oswego where they lived until 1995. Joe was an owner, CFO, and principal at the firm of Yost Grube Hall Architecture where he worked for more than 40 years. He was a dedicated professional and a straight-shooter. In his retirement, Joe reignited his love for painting and drawing. Joe loved Italian opera, sports, surf fishing, pets, wearing his Snuggie and playing with his grandsons.He is survived by his wife, Christine Macca; son, Joey Macca; daughter, Carrie Cowan; his son-in-law, Harley Cowan; and his grandsons, Henry and George Cowan.  In lieu of flowers please consider a gift to The St. Philip Neri Memorial Society, 2408 S.E. 16th Ave., Portland, OR 97214. To send a flower arrangement or to plant trees in memory of Joseph Anthony Macca, please click here to visit our Sympathy Store.

Joseph, beloved husband, father and grandfather passed away at home Tuesday, Sept. 18, 2018, after a long illness.He was born June 13, 1945, in Siracusa, Sicily, to the late Alfonso and Clara Macca. At age five, his sister Gaetanina was born... View Obituary & Service Information

The family of Joseph Anthony Macca created this Life Tributes page to make it easy to share your memories.

Joseph, beloved husband, father and grandfather passed away at...

Send flowers to the Macca family.