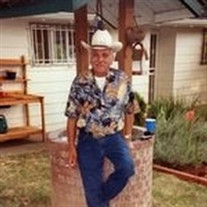 Guerra, Jose 'Joe' N. 78 03/13/1932 08/04/2010 Joe passed away Aug. 4, 2010, while in the care of his loving family. Joe was born March 13, 1932, to Emede and Felipa Guerra in Realitos, Texas. He was preceded in death by his parents and brother, Lupe Guerra. Joe settled in Oregon with the love of his life and constant companion, Dianna (Peterson). Together they owned and operated several businesses, including Guerra Construction and The Paragon Club. Joe was wounded in battle during the Korean War where he earned the Triple Bronze Star. He wore his Korean veteran hat as a constant reminder of his pride in service and country. He had many interests, but was most interested in good times with family and friends. He lived life to the fullest. His greatest pride was his family. Survivors include his wife of 52 years, Dianna; children, Donald (Debbie) Lopez, Yolanda (Victor) Garcia, Karla Garcia, Rick (Betina) Guerra, Joe (Linda) Guerra Jr., Randy (Lisa Miura) Guerra, and Ramon Guerra; brother, Butch (Stella) Guerra; and sister, Rosie (Rudy) Silva. He also leaves many cherished grandchildren and great-grandchildren. A service will be at 3 p.m. Friday, Aug. 13, 2010, in St. John the Baptist Catholic Church, 10955 S.E. 25th Ave., Milwaukie, OR 97222. A celebration of life will immediately follow at 9800 S.E. Main St., Milwaukie. A private committal will be held in Willamette National Cemetery. In lieu of flowers, donations may be made to St. Jude Children's Hospital. Arrangements by Peake Funeral Chapel.

The family of Jose N. "Joe" Guerra created this Life Tributes page to make it easy to share your memories.