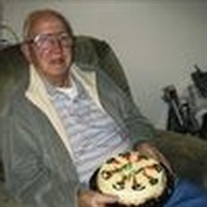 Johnny Norman Bennett, 84, of Milwaukie, Oregon went to be with the Lord on December 26, 2009. Johnny was born March 27, 1925 to Vada ( Wheeler ) and Jacob Orville Bennett in Derby, Iowa. He graduated from Chariton High School, Chariton, Iowa in 1943. He played a cornet in the Chariton High School band which took 1st place for the State of Iowa that year. He and his family moved to Pleasant Home, Oregon in 1943 where he worked in the Portland Ship Yards until his enlistment into the U.S. Navy. In the Navy, Johnny served as a Radioman, 3 rd Class in the Pacific arena. Johnny was honorably discharged in May of 1946. Prior to his discharge, on one of his leaves, he met the love of his life, Delphine Walter. They began to correspond and after military discharge they were married on November 15, 1946. Johnny and Delphine had their first home in Gladstone, Oregon where they started their family and eventually had four children... Joan, David, Alan and Karen. Alan went to be with the Lord in 1969. Family was important to John, and his children and grandchildren were blessed to have him as their Dad and Grandpa. The time Johnny spent with his grandchildren was precious and will always hold wonderful memories for them. He loved everything outdoors including camping with family and friends. He loved to water ski, fish, golf, bowl and play horse shoes which he patiently taught his children and grandchildren. He was so very proud of them and always had a hug and a " job well done " when they did something special. John loved his work and his co-workers. He was a people person and the part he loved most was getting out and talking with his customers. He worked for Conveyco Mfg. Inc. in Clackamas, Oregon as a General Manager from 1970 until retirement in 1996. He had great working relationships with his customers because of his wonderful sense of humor and his integrity. John also loved the Lord, from the time he was a little boy. He and Delphine became members of the Oregon City Nazarene Church in 1948. John was on the church board for many years. He loved the wonderful fellowship he had with his church family. John leaves behind his wife of 63 years, Delphine and his three children, Joan, David and Karen. He also had nine grandchildren and 3 great grand children. He also leaves his four brothers, Loren, Bob, Tom and Jim and four sisters, Emma, Donna, Janet and Sue. He was preceded in death by his sister, Wanda. The last four years have been a struggle and a long journey for John due to Lewy Body Dementia. Even with the progress of the disease, John kept his sweet spirit and gentleness. His family and friends have been blessed to have him in their lives and we will miss him. A memorial service for John will be held at the Oregon City Nazarene Church on 7 th and Taylor on Saturday, January 9 th at 2:00 P.M. A private interment with military honors will have already taken place. The family requests that in lieu of flowers, please send donations in John's memory to the Lewy Body Dementia Association at: LBDA 912 Killian Hill Rd. SW Suite # 202 C Atlanta, Ga 30047 www.lbda.org for donation instructions

Johnny Norman Bennett, 84, of Milwaukie, Oregon went to be with the Lord on December 26, 2009. Johnny was born March 27, 1925 to Vada ( Wheeler ) and Jacob Orville Bennett in Derby, Iowa. He graduated from Chariton High School, Chariton, Iowa... View Obituary & Service Information

The family of Johnny Norman Bennett created this Life Tributes page to make it easy to share your memories.

Johnny Norman Bennett, 84, of Milwaukie, Oregon went to be with...

Send flowers to the Bennett family.