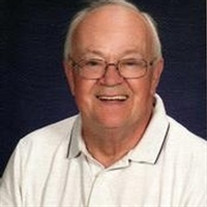 John Raymond McSperitt passed away August 29th, 2011 in a local hospital. Recitation of the Holy Rosary and Mass of the Christian Burial will be held Friday, September 9, 2011 at 12 noon at St. John The Baptist Catholic Church, Milwaukie, Oregon, with Reverend Maxy D'Costa as celebrant. John Raymond McSperitt was born January 26, 1939 to Raymond McSperitt and Mary Befort, in Elma, WA. The family moved to Oregon when John was 5 years old. John attended and graduated from Grant High School in 1957.He joined the Army National Guard. On April 8, 1961 John was joined in marriage to his wife of 50 years, Lila Mae Gervais. John and Lila raised two sons, Darrin and Sean. John and Lila attended St. Charles Catholic Church in Portland, but have most recently been attending St. John The Baptist Catholic Church in Milwaukie. John worked as a steam fitter in Portland, OR. Later in his career, he worked as the supervisor of commercial cooling and heating for Johnson Controls INC. He retired in 2002, due to health challenges. Outside of work, John was an active member of his community, as a past member of The Elks Lodge and Knights of Columbus. He also volunteered his time and resources, to help with The Special Olympics for many years. John also coached athletes as a J.V. baseball coach for 12 years while his boys were growing up. He was an avid sports fan. When not on the baseball field, he enjoyed hunting, fishing, and camping. John was preceded in death by his brother, Donald McSperitt, earlier this spring. John is survived by his wife, of 50 years, Lila Mae McSperitt of Milwaukie, OR; his two sons Darrin McSperitt of Milwaukie, OR and Sean McSperitt, with wife Melissa of Oregon City, OR; his sister Kathleen Berry of Boardman, OR; and four grandchildren, Sarah, Jon, Brock, and Maddie. Any contributions are asked to be made out to the Special Olympics.

John Raymond McSperitt passed away August 29th, 2011 in a local hospital. Recitation of the Holy Rosary and Mass of the Christian Burial will be held Friday, September 9, 2011 at 12 noon at St. John The Baptist Catholic Church, Milwaukie, Oregon,... View Obituary & Service Information

The family of John Raymond McSperitt created this Life Tributes page to make it easy to share your memories.

Send flowers to the McSperitt family.