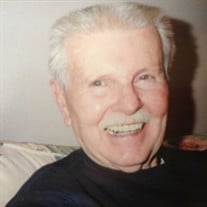 John "Jack" Darwin was born in Grandin, N.D., and moved to Portland, Oregon in 1941, where he lived in the Giles Lake area. He moved to the Sunnyside area after World War II. Jack attended Milwaukie Union High School where he was instrumental in starting the golf team and was senior class vice president. Upon graduating in 1952, he proceeded to the recruiting station, where he enlisted in the U.S. Army. He was trained in intelligence and served in the DMZ in South Korea. After being honorarily discharged from the Army, Jack enrolled at Portland State University. He soon began a long career at North Pacific Lumber. Continuing in the plywood business, he started his own company, Panel Products, which he ran until retiring in 2008. Jack married his wife Isabelle Weisensee on May 5, 1962, and were happily married for 51 years. Together they enjoyed spending time in Las Vegas and Hawaii, and finally realized a dream of traveling to the Masters golf tournament in 2005. He was active in youth sports in Milwaukie, coaching baseball, basketball and football and served on the football "chain gang" at MHS for a number of years. Jack loved playing golf, and was very proud of his feat of hitting two holes-in-one and holding the course record at Top O' Scott golf course. He loved reading, walking, spending time with his grandchildren, and enjoyed his extensive collection of pocket knives and baseball memorabilia. He was proceeded in death by his brother Bob and his sister Noreen. Jack is survived by his wife Isabelle, his four sons Mark,Jeff ,John and Dave, sisters Marillyn, Phyllis and Karen ,seven grandchildren, Colby, Mig, Brogan, Jackson, Alex, Griffin and Aven. In lieu of flowers, the family requests remembrances be made in Jack's name to CYO Sports and LaSalle Athletic Association. Family and friends are invited to attend a memorial service and reception following, held at 1 p.m. on Friday, August 30th at St. John the Baptist Catholic Church in Milwaukie.

John "Jack" Darwin was born in Grandin, N.D., and moved to Portland, Oregon in 1941, where he lived in the Giles Lake area. He moved to the Sunnyside area after World War II. Jack attended Milwaukie Union High School where he was instrumental... View Obituary & Service Information

The family of John Darwin "Jack" McLaughlin created this Life Tributes page to make it easy to share your memories.

John &quot;Jack&quot; Darwin was born in Grandin, N.D., and moved to Portland,...