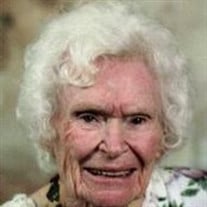 Joan Waite, aged 95, beloved mom, grandmother, great grandmother, aunt, sister-in-law, mother-in-law, and friend, passed away after a brief illness March 1, 2012 in Milwaukie. Born June 1 in Amarillo, Texas to Howard and Carrie Gardner Orr. Her family moved to Pendleton where Joan attended school and graduated from high school. She was offered a scholarship to Stanford but chose to attend Oregon State College and graduated cum laude with a degree in Home Economics in 1938. The day following her graduation, on her birthday, she married Stephen David Waite in Corvallis. Joan told her daughters that she knew from the first time she met their father that he was the love of her life.An only child, Joan loved being part of her husband's large family. Visits and family gatherings were an important part of her life and her last Christmas was celebrated with a family gathering in the home of her nephew David Waite. She and Stephen had four children and Joan's chosen career was to be a homemaker and to provide a loving home where her children could be nurtured and supported in developing their individual gifts. Throughout her life she encouraged her children in their education, careers and their families. She continued to travel each year to Arizona and England for extended visits with her daughters and their families up until two years ago. With Stephen she was an active member of many Masonic, fraternal and service organizations in the towns where they lived: Vernonia, Longview, Washington, and Reedsport, Oregon. She was a member of Martha Chapter NO.48 OES for 47 years. In Reedsport during their forty years there she contributed to the community through her involvement with many organizations: Rebekah Lodge, VFW Auxiliary, the Hospital Auxiliary and the Senior Center where she worked on the Meals on Wheels service for over 7 years. She regularly attended St Mary's Episcopal Church in Gardiner but as a talented pianist she volunteered her talents for many other churches in Reedsport. After her husband's death in 2001 she moved to Willamette View Manor in Milwaukie and continued to attend both Eastern Star and Daughters of the Nile (Nydia Chapter) meetings. At the Manor her practice of volunteering continued and for a number of years she worked in their charity shop and helped organise and was the treasurer for the Vespers group. Joan valued education and was a regular and generous donor to the OSU Foundation. Her parents, her husband Stephen and her son Stephen Howard Waite, precede her in death. Joan is survived by her three daughters, Julia Bonser, Tucson, Ariz, Carolyn (the Revd Frank) Mercurio, Derbyshire, England and Kathryn Baarson, Glendale, Ariz; her daughter in- law, Sue Waite, Portland; six grandchildren Geoffrey (Michelle) Bonser, Joella (Karl) Berkner, Francesco (Amanda) Mercurio, Scott (Brittany) Baarson, Linda Baarson, Rory Waite; five great grandchildren Lucian Moser, Isidora Bonser, Calidora Bonser, Loretta Mercurio and Kaspian Berkner; her brother-in-law and sister-in-law John and Janet Waite, sister-in-law Etta Waite and many nieces and nephews.Joan was interred at Willamette National Cemetery.A celebration of Joan's life will be held on Saturday, April 28 at 2pm in the Terrace Auditorium at Willamette View Manor, 12705 S.E. River Road, Milwaukie Oregon. In lieu of flowers, contributions may be made to Cancer Research or the OSU Foundation, 850 SW35th Corvallis 97333.

The family of Joan Waite created this Life Tributes page to make it easy to share your memories.

Send flowers to the Waite family.