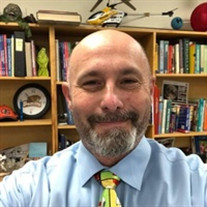 Jeffery Adam Upkes June 25, 1971 to April 2, 2018 Jeffery passed away at home on April 2nd, 2018. Jeffery was born in Portland and lived throughout the northwest until settling down in the Milwaukie area. He graduated from Oregon State University with a Bachelors of Science degree in horticulture and eventually earned a Masters Degree in education from Old Dominion University. Jeffery's sense of honor led him to follow in his family's footsteps and join the Navy. He served as a Seabee and deployed during Operation Iraqi Freedom, eventually retiring as an E01. His desire to serve was always on display, he worked as an ODOT Incident Response officer until he found his true calling as a science teacher. He taught at both Ogden and Gardiner Middle Schools, shaping the lives of countless future scientists. Jeffery always spoke about how happy it made him to see his students grow and learn. Jeffery married Kelli Palmer in 2002 and they had two handsome boys, Sam and Sawyer. As a father, Jeffery was unrivaled in his dedication and devotion to his boys. It was always a toss-up to see who had more energy, the boys or Jeffery (usually Jeffery did). They were constantly on the go with camping, fishing, boating, hiking and numerous sports. Jeffery was an athlete all of his life and he shared his love of sports through coaching his kids and school teams.  Jeffery is survived by Kelli, Sam, Sawyer, his parents Duane and Sandy Upkes, Deborah and Bill Bailey, grandmother Phyllis Cavaya, his brothers: Chris, Rick, Treven and Quinn and numerous aunts and uncles.  A Military Honor Guard Service will be held Wednesday April 11th at 2:30 pm at the Willamette National Cemetery, 11800 SE Mt. Scott Blvd, Portland, OR 97086 A Celebration of Life will follow directly after at the VFW, 7118 SE Fern Ave, Portland, Or 97206In lieu of flowers, “in kind” donations can be made to the Tyrone S. Woods Wrestling Foundation http://www.tyronewoodswrestlingfoundation.org/

Jeffery Adam Upkes June 25, 1971 to April 2, 2018 Jeffery passed away at home on April 2nd, 2018. Jeffery was born in Portland and lived throughout the northwest until settling down in the Milwaukie area. He graduated from Oregon State University... View Obituary & Service Information

The family of Jeffrey Adam Upkes created this Life Tributes page to make it easy to share your memories.

Send flowers to the Upkes family.