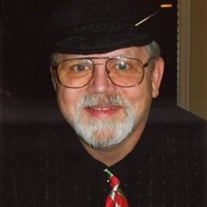 Jay Ledyard, beloved husband, father, and grandfather past away at the age of 62 and is missed dearly. Jay was born on December 20, 1949 in Portland, Oregon to his loving parents Donald C and Matilda (Marino) Ledyard. He was the youngest of three children. Sadly, he passed away on Sunday, December 2, 2012. In his early years he attended Ascension Catholic School and Madison High School. He was part of the graduating class of 1967. He continued his education at Portland Community College and Portland State University. He started his 37 year career in the equipment industry with Ingersoll-Rand Company in 1972. He continued his career for many years working for Road Machinery Inc., Clyde West Inc., and Enviro-Clean. From someone who loved him "Jay was a God fearing, God loving man that had his priorities in the right place and a great example of what a kind and gentle man should be." He was a man of great character who had a heart of gold. He was a simple man who genuinely cared for people. Family meant everything to him. He loved celebrations and holidays which were spent with his family. He was always there for anyone who needed his help and was proud to be called a friend by his neighbors. He loved to build things with his two hands and enjoyed working in the yard. He was amazing in the kitchen and could create a delicious meal for his family from anything. Jay loved Oregon so much he remained living in the Portland area throughout his life to be close to the people he loved. Jay is survived by his wife of 36 years, Deborah, daughters Amy (Ledyard) and spouse Mario Valente, and Amber Ledyard. He was a proud grandfather of Gabriel, Emmaly, Mario, and Ashton. He is also survived by his sister, Joy Keller, and numerous nieces, nephews, cousins, aunt and uncle. He is preceded in death by his parents, his brother, Donald S. Ledyard, and brother-in-law, Harold (Dick) Keller. In lieu of flowers, please make donations in his honor to your local food bank and/or homeless shelter.

Jay Ledyard, beloved husband, father, and grandfather past away at the age of 62 and is missed dearly. Jay was born on December 20, 1949 in Portland, Oregon to his loving parents Donald C and Matilda (Marino) Ledyard. He was the youngest of... View Obituary & Service Information

The family of Jay Roger Ledyard created this Life Tributes page to make it easy to share your memories.

Jay Ledyard, beloved husband, father, and grandfather past away...

Send flowers to the Ledyard family.