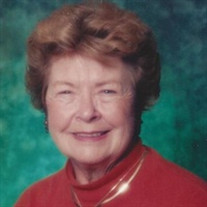 JANICE (JANEESE) CORINNE FITZELL Daughter of Josephat John Bolduc and Edith Mae Bolduc. Born on December 23rd, 1924 in Kelso, Washington and died September 28th, 2014. Janice (Janeese) was nicknamed Bubbles because as an infant blew bubbles while lying in her crib.They moved from Kelso, Washington to Juneau, Alaska at the age of 6 years and resided in Juneau until the age of 11 years old. Moved to Ketchikan, Alaska and through her teenage years, active in the United Methodist Church as a teenager and cheer leading Queen at Ketchikan High School and graduated in 1942. Janice (Janeese) studied accounting, typing and office skills in High School and became a bookkeeper at her mother's business, Ketchikan Steam Laundry.During World War II, Janice(Janeese) danced with Servicemen where she met her future husband, a young Coast Guardsman, Chester W. Fitzell. Janice ( Janeese) and Chet were married on March 11th, 1945. Chester D. Fitzell, their son was conceived on their trip to the East Coast where Chester W. Fitzell was stationed at the Coast Guard Academy in Connecticut. After his discharge from the Coast Guard, both Chet and Janice( Janeese) worked at the Ketchikan Steam Laundry. Chet secured a job in the shipping industry and worked for Alaska Steam Company. The couple moved from Alaska to Milwaukie, Oregon, Chet's family home, after four rainy years in Ketchikan and resided in Milwaukie four 11 years. While residing in Milwaukie, both Chet and Janice(Janeese) were active in the Milwaukie Elks Lodge where Janice(Janeese) became an Elkette. Janice (Janeese) was also active in a Professional Woman's Sorority called Beta Sigma Phi. In 1961, due to a job transfer with Chet's job at Matson Navigation Company, the couple and their son moved to Burlingame, California in 1961 where Janice (Janeese) worked at Sherman & Clay and Salvation Army as a bookkeeper. Due to a job transfer with Matson Navigation Company, the couple moved again to Seattle, Washington where Janice(Janeese) studied for her Real Estate Sales License at Anthony's Real Estate School and worked as a Real Estate Agent with Marjorie Scott at Magnolia Bluff Realty. Due to another job transfer with Matson Navigation Company, 1965, the couple moved back to Oakland, California where Janice(Janeese) started working as a bookkeeper with Ferguson Insurance Company in Oakland, California. Janice(Janeese) was predeceased by her parents, Josephat and Edith and her brother Joseph Bolduc. Janice(Janeese) is survived by her husband of 69 years, Chester W. Fitzell, her son, Chester D. Fitzell, her daughter-in-law, Kamla P. Fitzell and two Step Granddaughter's, Susan Nesbitt, her husband David Nesbitt, her Great Grand Daughter Katherine Nesbitt and other Step Granddaughter Pamela Singh and her Great Granddaughter Camille Foster. Interment was at Willamette National Cemetery, where her father Josephat Bolduc is buried.

The family of Janice Corinne Fitzell (Bolduc) created this Life Tributes page to make it easy to share your memories.