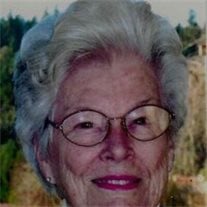 Janet Scott Woodrow, age 97, died of natural causes on Saturday, March 21, 2020 at Willamette View Retirement Community in Portland, Oregon.  Janet was born in Washington D.C. on May 22, 1922 to Lottie (nee Bohannon) and Edward Levering Scott. She grew up near Bladensburg, Maryland. She attended Washington College in Chestertown, Maryland for one year, and completed her bachelor’s degree at the University of Maryland. It was while working at the chemistry department there that she met her future husband, Carroll Woodrow, who was working on his master’s degree. They married in 1943 and had a long and happy marriage that ended with his death in 1999. They enjoyed their travels to Europe and North America, especially touring national parks in their motor home. Janet and Carroll raised two children, Paul, who died unexpectedly in 2018, and Beth, of Portland. In addition to being a mother and homemaker, Janet also followed her interest in history by serving as a museum guide at Winterthur and Eleutherian Mills in Wilmington, Delaware. It also led to her interest in family history, a project that she and Beth pursued together. Janet also enjoyed gardens and gardening and participated in an investment club. She loved being around people and was always ready for a gathering of friends and family. She moved to Portland in 2009 to be near her daughter and enjoyed 10 years at Willamette View. In her final years she given loving care by the staff in the assisted living unit, and by Dr. Jessica Burness. She is survived by her daughter Beth Woodrow and her husband, Scott Latham; daughter-in-law, Christina Woodrow (nee Ahrendt) and three grandchildren, Aaron, Andrew and Katherine Woodrow.

The family of Janet Scott Woodrow created this Life Tributes page to make it easy to share your memories.

Send flowers to the Woodrow family.