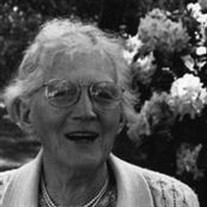 Jane passed away Thursday August 11, 2011 at he age of 98. Jane was born to Walter A. Campbell and Emma Mary Campbell of Portland and Condon Oregon on June 13, 1913. Jane's father died before she was 2 years old. She grew up with her older brother, her mother and her mother's mother in Portland's Irvington neighborhood. Jane attended Irvington Grade School, St. Helen's Episcopal secondary school and graduated from Reed College in 1937. She then taught briefly at Grant High School and Ashland High School. On August 1, 1940 she and Robert N. Munly Jr. were married at All Saints Catholic Church in Portland. She had known Robert or Bob since early childhood. Shortly after marriage she converted to the Catholic Church and remained an active member until her death. Jane and Bob had four children, Robert, James Walter and Mary, several grandchildren and an increasing number of great grandchildren. Jane's husband of 63 years preceded her in death in 2003. Throughout their life together Jane and Bob were inseparable, gifted with a long loving supportive and happy marriage. Throughout her life Jane maintained an active interest and involvement in civic, literary and church affairs. She conducted research work with the League of Women Voters, and was a local committee person and fund raiser for the Democratic Party. She was also a member of the Catholic Daughters, Churchwomen United and various study and literary guilds. Both she and Bob enjoyed reading the gospel and epistle at St. John's Sunday masses for several years. Jane loved and was proud of her family; she enjoyed her home and garden. After Bob retired they often traveled to the Oregon coast and points beyond. It was not unusual to get a call indicating their day trip to the coast had been extended to San Francisco, Utah or some far corner of eastern Oregon. Jane had a positive outlook and accepted life's trials and disappointments with grace dignity and the strong belief things would work out for the best, which they generally did. Jane believed in God; her bible and Church newsletter were always close at hand, particularly in her later years. Jane's intelligence, individuality, strong will and indominatable spirit were evident to all who knew her. Her memory will continue to provide inspirational support to her family and friends. Recitation of the rosary will be held at 10:00 AM followed by a Mass of Christian Burial at 10:30 AM on Monday, August 22,2011, at St. John The Baptist Catholic Church in Milwaukie, OR. Burial will be in Skyline Memorial Gardens, Portland, OR.

Jane passed away Thursday August 11, 2011 at he age of 98. Jane was born to Walter A. Campbell and Emma Mary Campbell of Portland and Condon Oregon on June 13, 1913. Jane's father died before she was 2 years old. She grew up with her older... View Obituary & Service Information

The family of Jane Munly created this Life Tributes page to make it easy to share your memories.

Send flowers to the Munly family.