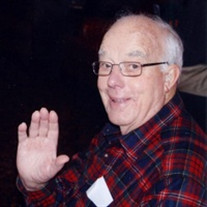 A memorial service for James Dale ("Dale") Read will be held at Montavilla United Methodist Church, 232 S.E. 80th Avenue, Portland, Oregon 97215, at 1:00 p.m. on Wednesday, October 9, 2013. The burial will be private. Dale was born to Evah and Herman Read in Glendive, Montana on May 12, 1921. He died peacefully on September 26, 2013 in Canby, Oregon. As a young boy, Dale's family moved to Washington State. He graduated from Ridgefield High School in 1941. In 1939, he helped fight the Tillamook Burn forest fire. He often said this was the hardest work he ever did. During World War II, he served in the United States Merchant Marines. His service in the Merchant Marines started a life-long love of the water, exemplified by his mountain cabin on the Zig Zag River, a home on the Sandy River and a house on the Oregon Coast. In 1942, Dale married Florence Nelson; they later divorced. In 1975, he married Loretta Rice. They were married for 32 years until her death in 2007. Dale owned and operated several restaurants in downtown Portland. Starting in the 1940's, Dale's Coffee Shop on Southwest Third Avenue was famous for its homemade bread and baked goods as well as his signature great customer service. While operating the restaurant, Dale also started Dale's Catering Service, catering weddings and parties, and becoming one of Portland's most successful catering businesses. In the 1960's, he closed the restaurant and concentrated exclusively on catering until his retirement in 1994. Following his retirement, Dale enjoyed spending time at his beach home, gardening, cooking and spending time with family and friends. Dale is survived by his son, Jim Read (Francine); daughter, Gayle Rue (C.J.); granddaughter, Elise Rayner; grandson, Eric Rue; great grandsons Kai and Jack Rayner and Beck Rue; brother, Ashley Read; sisters Dixie Jean Pollack and Joyce Lenaburg; stepsons Gordon and Gary Rice and their families; and his dear friend and companion, Ethel Boardman. In lieu of flowers, memorials may be made to Montavilla United Methodist Church, the Oregon Food Bank, or a charity of your choice.

The family of James "Dale" Read created this Life Tributes page to make it easy to share your memories.

A memorial service for James Dale (&quot;Dale&quot;) Read will be held...

Send flowers to the Read family.