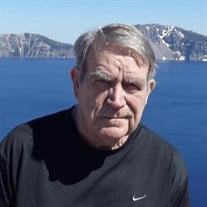 James Patrick Clay, 75, passed away, peacefully, in his sleep on May 29th, 2021. He was born in 1946, and adopted shortly after birth by Glenn and Blanche (Meagher) Clay, of Milwaukie, Oregon. Jim loved his hometown. He was a Milwaukie fixture all, and a resident for most, of his life. Jim grew up in Milwaukie. His parents owned Clay’s Dry Goods store, which was a staple of the community at the time. He played baseball and enjoyed riding his horse, Jalar, in his growing-up years. Jim went on to graduate from Central Catholic High School in 1964. Soon after graduation, he joined the Army National Guard of Oregon. He served, briefly, on active duty, and 5 years on reserve. In August, 1975, Jim was hired on by Milwaukie Police Department. He was sent to the Oregon Police Academy, and completed his training in April, 1976. He served the community he loved until he retired in June, 1990. There were a few other career paths Jim took after that, but based on the mementos and photos he kept around him, his police work is what he was proudest of. In his later years, Jim loved to travel, a little bit abroad, but mostly close to home. There were many trips to the Oregon coast for crabbing and relaxing. A few more journeys took him to the Wallowas in search of memories from his youth. He enjoyed going to the movies. If it was anything to do with dogs, he knew to take something to wipe away the inevitable tears. He was a man with a soft heart despite the grumpy look he wore. His family and friends will miss him dearly. Jim was preceded in death by his parents and older brother, Robert. He is survived by his devoted wife of 23 years, Barbara, his son, Kevin Clay (Michelle), his daughter, Stephanie Cole (Evan), step-son David Tacheny (Kimberly), step-daughter Melissa Tacheny, 4 grandchildren, 4 step-grandchildren, 1 great-granddaughter, and many more friends and family members. A service is planned for 10am, Tuesday, June 22nd, 2021 at Mountain View Cemetery 500 Hilda Street, Oregon City, Oregon, 97045. In lieu of flowers, please consider making a donation to Oregon Special Olympics in Jim’s memory.

James Patrick Clay, 75, passed away, peacefully, in his sleep on May 29th, 2021. He was born in 1946, and adopted shortly after birth by Glenn and Blanche (Meagher) Clay, of Milwaukie, Oregon. Jim loved his hometown. He was a Milwaukie fixture... View Obituary & Service Information

The family of James Patrick Clay created this Life Tributes page to make it easy to share your memories.

James Patrick Clay, 75, passed away, peacefully, in his sleep...

Send flowers to the Clay family.