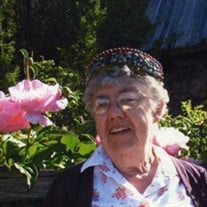 Irene passed away February 10, 2014 at the West Hills Health and Rehab. Center at the age of 94. In accordance with her wishes, she will be cremated. Irene was born the second of three daughters to Ralph and Theresa Ruehle in Pleasant Township, Senneca County, Ohio north of Tiffin and grew up on a farm near Attica, Ohio. She graduated from Columbian High School in Tiffin in 1937 and from Bowling Green State University on June 21, 1944 with a B.S. in Education. In 1944 she began teaching elementary art in Akron, Ohio Public Schools. She supervised many student teachers over the years. In 1952 she was initiated into Delta Kappa Gamma, an honorary society for women educators. In 1965 Irene was offered the position of Supervising Teacher for Elementary Art, a position She held for nine years. She returned to school and obtained a M.A. Degree in Art Education From the College of Design, Architecture, and Art at the University of Cincinnati on August 28, 1971. She resumed her position at Akron Public Schools and also taught evening classes at Akron University and weaving at the Canton Art Institute. In 1975 she was chosen as a Jennings Scholar, an Ohio teacher honorary and in 1976 retired from Akron Public Schools with 32 years of service. Soon after retirement she married Frederick W. Johnston (who had been married to her sister Aleta until her death) and moved to Milwaukie, Oregon. Here she was an avid gardener and active in the local rose society and in church work. She loved to travel, especially to the National Parks and often combined summer travel with further study in Mexico and Spain. After retirement and marriage she continued to travel with her husband and ultimately visited all continents except Antarctica. Irene was an accomplished artist and has displayed and sold her watercolors and weavings in galleries in several cities. Irene is survived by Frederick and Aleta's three sons; David, Robert and Gerald and their children and grandchildren and by the children of her younger sister Ruth and her husband, Clarence Crow; Philip, Rebecca, Jane and Clinton and their children and grandchildren. A Memorial Service is scheduled for Saturday, March 22, 2014 at 1:30 PM at St. Paul's United Methodist Church, 11631 SE Linwood Ave. Milwaukie, Oregon Donations to St. Paul's United Methodist Church are suggested in lieu of flowers

Irene passed away February 10, 2014 at the West Hills Health and Rehab. Center at the age of 94. In accordance with her wishes, she will be cremated. Irene was born the second of three daughters to Ralph and Theresa Ruehle in Pleasant Township,... View Obituary & Service Information

The family of Irene Magdalene Johnston (Ruehl) created this Life Tributes page to make it easy to share your memories.