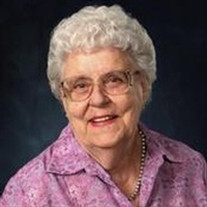 Ina Mae Martin, 90 a resident of the Milwaukie community passed away March 19, 2011 at her home. Graveside Services will be held at a later date at the Hillside Memorial Park in Redlands, California under the direction of Emerson Funeral Home, 703 Brookside in Redlands, California. Ina Mae Martin was born February 24, 1921 in Delta, Colorado to the late Kirk and Velma Singleterry Billingsley. She moved with her family to Pleasant Hills, New Mexico where she grew up. In 1935 the family moved to Fresno, California where Ina graduated from Roosevelt High School in 1939. Ina was united in marriage to Grover Reid Martin in November of 1939. They made their home in Redlands, California where they celebrated forty-one years of life together and raised one daughter, Frances Gayle. Grover preceded Ina in death in 1980. She began working at the California Water & Electric Company which would eventually change into what is Verizon today. After staying forty-five years with the same company she retired in 1984. She traveled through her work to Hawaii and Seattle. Ina was very active all of her life. She was a longtime member of the Sacred Heart Parish in Redlands, California and volunteered for "Angels On Earth". Ina was active in the Sierra Club, the American Legion and Daughters of the American Revolution. She was part of the "Pioneers" a Ted Fisher Foundation that raised money for many non profit organizations. She and Grover set up for the 1st Bicycle Races in Redlands for many years. Ina was in her 60's and winning first place in her age group as well as earning the most donations. Among her personal interests she enjoyed quilting, fishing and reading. Her biggest passion was geneology. Ina moved to Oregon in 2006 to be near her daughter and grandchildren. She was busy with trips and outings at the Springs. Survivors include her daughter, Frances Gayle Rogers of Milwaukie, her only brother, Jack Billingsley of Cottonwood, Az, three grandchildren; Kathleen Hauck, Jackie O'Keeffe, and Charles Rogers, as well as ten great grandchildren and six great great grandchildren with one more on the way. Local services are entrusted to Peake Funeral Chapel, Milwaukie, Oregon.

Ina Mae Martin, 90 a resident of the Milwaukie community passed away March 19, 2011 at her home. Graveside Services will be held at a later date at the Hillside Memorial Park in Redlands, California under the direction of Emerson Funeral Home,... View Obituary & Service Information

The family of Ina Mae Martin created this Life Tributes page to make it easy to share your memories.

Ina Mae Martin, 90 a resident of the Milwaukie community passed...

Send flowers to the Martin family.