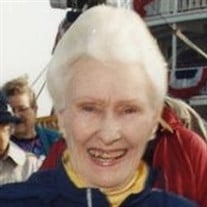 Ida Mae Lillie, age 100, died in her home at The Springs at Clackamas Woods on Sunday, August 26. Her final days were spent with family and loved ones. One hospice nurse said that Lillie was the sort of patient whose memory would remain with her always. Ida Mae is an inspiration to all who knew her. Born January 9, 1912 in Nampa, Idaho to Herman and Zella Nickels, but spent most of her childhood in Hawaii. After graduating from high school, she enrolled at the University of Oregon where she studied business and dance and met her husband, Jerome C. Lillie. Married in 1936, they began their lives together in Bend, Oregon where Jerry was employed as a school teacher and coach. Jerry's career moved the couple many times. Over the years they made homes in Portland, Ellensburg, Honolulu, Salem, Eugene and Milwaukie. In 1957 she began her teaching career as a math instructor at Milwaukie High School. She went on to become a business teacher at Clackamas High School, Rex Putnam High School and Sabin-Schellenberg Center. Her love of dance made her choice to instruct the High Steppers Dance Team at Milwaukie and Clackamas High Schools, a natural one. After retiring from teaching, she spent her 70's and 80's working for Oak Grove Disposal Company where she computerized the billing system. Later, she spent time as a volunteer at Kaiser Hospital where she used her bookkeeping skills and helped manage the business records for a very large volunteer staff - a position she held until she was 99 years old. Her love of history inspired extensive travel which included trips to Europe, Africa, Asia, New York and countless other locations throughout the United States. In her spare time she enjoyed her hobbies, including crossword puzzles, reading, investing and following the Oregon Ducks. Ida Mae is survived by her son Jay Lillie (Beth) and her daughters Nancy Dammann, Dinah Chadwick (Ed), and Brenda Griffin; her grandchildren Kelly Chadwick, Mitchell Chadwick (Emily), Kathryn Lillie, and David Lillie; her two great-grandchildren and her nieces and nephews. She was preceded in death by her husband. In lieu of flowers, remembrances can be made to the Jerry Lillie Scholarship Fund at the Wells Fargo branch in Oak Grove Milwaukie. No service will be held, as requested by the deceased.

Ida Mae Lillie, age 100, died in her home at The Springs at Clackamas Woods on Sunday, August 26. Her final days were spent with family and loved ones. One hospice nurse said that Lillie was the sort of patient whose memory would remain with... View Obituary & Service Information

The family of Ida Mae Lillie created this Life Tributes page to make it easy to share your memories.

Ida Mae Lillie, age 100, died in her home at The Springs at Clackamas...

Send flowers to the Lillie family.