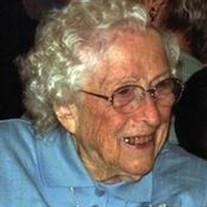 Hazel Clara Bernhard, 96, a resident of the Milwaukie community died early Sunday morning, February 20, 2011 at her home following a heart attack. Family and Friends are welcome to visit Thursday, February 24, 2011 from 1:00 PM to 5:00 PM or Friday, February 25, 2011 from 8:30 AM to 10:00 AM. Funeral Services will be held Friday, February 25, 2011 at 10:00 AM at Peake Funeral Chapel, 1925 SE Scott Street, Milwaukie, Oregon. Graveside Services and Vault Interment will be held Friday at 12:30 at Valley View Cemetery, Newberg, Oregon. Hazel Clara Bernhard was born November 30, 1914 in Los Angeles, California to the late Jake and Bessie (More) Henry. She was raised and educated there having graduated from the Gardena High School. She was united in marriage to Howard Bernhard on June 21, 1936 in Los Angeles, California. "It was the longest day of the year," Howard would say, who lovingly used that line to tease his friends and family. They celebrated fifty-one years of life together and raised three children before he preceded her in death on February 17, 1988. Hazel was a busy wife and homemaker. She took good care of her family and in 1963 they moved to Newberg, Oregon. She enjoyed bowling and she served as the secretary-treasurer for two different leagues for several years. The family did some camping and fishing. Hazel did some traveling including several cruises to Mexico, the Carribean and Alaska. She also made two trips to Canada so she could go watch the Polar Bears. Among her personal interests she liked to knit and sew doll clothes. In 2001 Hazel moved into Milwaukie to be near her family. She was preceded in death by her brother, Walter, her sister, Frances, and her son, Clifford Bernhard in 1967. Survivors include her daughters and son in law; Shirley L. Almond of Milwaukie, Lois and Paul Daniels of Garibaldi, Oregon, five grandchildren, four great grandchildren and two great-great grandchildren. Services are entrusted to Peake Funeral Chapel, 503-654-7755 visit our website for online info and tributes. www.peakefh.com.

Hazel Clara Bernhard, 96, a resident of the Milwaukie community died early Sunday morning, February 20, 2011 at her home following a heart attack. Family and Friends are welcome to visit Thursday, February 24, 2011 from 1:00 PM to 5:00 PM or... View Obituary & Service Information

The family of Hazel Clara Bernhard created this Life Tributes page to make it easy to share your memories.

Hazel Clara Bernhard, 96, a resident of the Milwaukie community...

Send flowers to the Bernhard family.