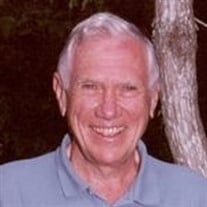 Harry E, Smith Jr. 08/06/1927 - 3/27/2010 Harry E. Smith was born in the small town of Winamac, Indiana to Harry Sr. and Caroline Smith. He served briefly in the Navy at the end of World War II. Harry graduated from Purdue University in 1950, where he served as Editor of the Purdue Exponent newspaper. He married his high school sweetheart Patsy Mann and went to work at General Electric in Schenectady and Syracuse, New York, holding a variety of positions in sales, marketing and general management. In 1970, Smith joined CBS as a Marketing VP and became the company's Corporate VP of Technology, Planning and Development. In 1982, Smith helped CBS launch Prodigy, a joint venture with IBM and Sears that was one of the first commercial on-line services. He later became Prodigy's Senior Vice President of Commercial Development. During his free time, Harry enjoyed skiing, sailing, theater, golf, travel and dry martinis. He fueled his debating skills by reading numerous non-fiction and history books, and regularly completed the NY Times crossword puzzle. Upon retiring from Prodigy in 1990, Smith formed Online Market Development, a consulting company working with U.S. and German companies. In 1996 he and Pat retreated to a home on a golf course in Florida to hone his tan and golf game. They finally retired at Willamette View in Milwaukie, Oregon where he made new friends and participated in the Great Discussions Group, the Trivia group and other activities. He also enjoyed cocktail hour on the roof of the Court building looking out over the Willamette River with his wife and family. Harry is survived by his wife; daughters Vicky and Sheryl; sons Terry and David; sister Judy and brother-in-law Mel Myers; son-in-law Walter Allais and daughter-in-law Hilary Herbold; grandchildren Anna Petursson, Steffi Petursson, Emma Smith, Eliza Smith, Owen Smith, Will Smith, Jessica and Kelsey Kosinski; and nephews Scott and Curtis Towne. A special thanks to the loving health care providers at Willamette View, Willamette Falls Hospice and the Legacy Hopewell Hospice Center. Memorial Contributions may be sent to: Legacy Hopewell Hospice House, 6171 SW Capital Hwy, Portland, OR 97239 Willamette Falls Hospice Center Or, a charity of your choosing in Harry's name.

The family of Harry E. Smith created this Life Tributes page to make it easy to share your memories.

Send flowers to the Smith family.