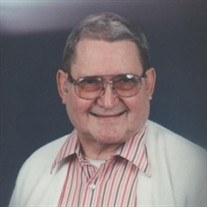 Harry Donald Shaw passed away Monday, June 1, 2015 at his home in Milwaukie, OR. He was born November 11, 1930 in Oak Grove Oregon to Mina and Claude Shaw. He met the love of his life, Mary Johnson at West Lynn High School in 1949. During their four year courtship Don was also a member of the US Air Force. They were married Sunday, January 25, 1953 in Salem, OR. They later settled in Portland and were blessed with two sons, Myron and Bobby whom later gave them many grandchildren. Don was a :Jack of all trades." If he couldn't fix something he did whatever it took to learn how. He drove Sunday School bus and later became a diesel mechanic and ran his own service station in addition to having a large shop at home letting every young man that asked use it to work on their cars and teaching them how along the way. Once he got a wild hair and decided to paint his old Studebaker yellow with pink pockadots. It was the talk of the town. Then he operated an appliance shop and fixed just about anything. He was also a diesel mechanic for the railroad for 40 years. At home if Mary needed anything he would build it for her including a huge walk in freezer. These were just a few of his many skills. Don and Mary always had a house full of kids, some just visiting and others that needed a place to stay. Their motto was "there is always room for one more." In 1962 a teenager named Susie who lived in a foster home down the road decided she wanted to live with Don and Mary, they took her in and that began their lives as foster parents. Over the years they had hundreds of foster children live with them, loving each and every one. Still sharing their lives including Susie, are their foster daughter Shauna, foster son Rick and their families. In 1968 two beautiful baby twin girls, Ann and Rose came into their lives, they adopted them and made them their own. Little Ann passed away early in her life but Rose has continued to be their own precious little girl. In 2010 Don lost Mary to cancer nearly breaking his heart. Don was always helping others including friends, family and anyone else that needed help. Don inherited a watch business from his brother Walt which started him off on a new venture. Fixing watches and clocks became his passion. Then it wasn't just people he helped put back together but every old watch that came his way. He had several grandfather clocks he loved. After many years that included several heart attacks and strokes he was in a nursing home for a short time (after Mary had passed away). He was finally strong enough to return home in 2012 accompanied by his caregiver Connie. Connie took very good care of him, and married Don later that year. Don's nickname was the Energizer Bunny because just as you thought he couldn't handle one more thing he would always bounce back. As he leaves this earth, please remember this; He love God, his family, friends, animals and life. He did not want us to grieve for him but to celebrate his life. Don was preceded in death by his wife Mary, a daughter Ann, son Bob and his granddaughter Anna. Until we meet again may God Bless him and may he rest in peace.

Harry Donald Shaw passed away Monday, June 1, 2015 at his home in Milwaukie, OR. He was born November 11, 1930 in Oak Grove Oregon to Mina and Claude Shaw. He met the love of his life, Mary Johnson at West Lynn High School in 1949. During their... View Obituary & Service Information

The family of Harry Donald Shaw created this Life Tributes page to make it easy to share your memories.

Send flowers to the Shaw family.