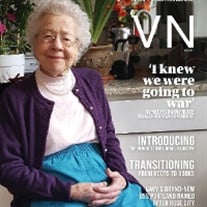 Obituary for H. Jean Wojnowski 104 Years Well Lived     Jean Allison was born in Renrock, Ohio, on May 14, 1915, as the first child of John Murray and Hazel Dye Allison. She had one brother, John (Jack) Murray Allison Jr. who proceeded her in death.   Always a believer in a well rounded education she obtained a B.A. degree Cum Laude from Muskingum College in New Concord, Ohio. She had a remarkable command of the English language and it was rare anyone could challenge her with a word for which she was unable to give a nearly correct definition. She was an excellent student and with the help of scholarships went on to Francis Payne Bolton School of Nursing at what is now Case Western Reserve University in Cleveland, Ohio to obtain a Masters in Nursing in 1941.   After graduation she worked for a short time in Cleveland as WW II was increasingly active in Europe and the South Pacific. It is in 1941 that Jean embarked on what she referred to as the greatest adventure of her life. With a couple of friends from school she joined the Cleveland Hospital Unit of the Army which was the same contingent that had responded in WW I. Army nurses were inducted as 2nd Lieutenants and the new recruits were lodged on an Army adopted passenger ship that was a sister to the Morro Castle.   During their 37 day crossing to Melbourne, Australia via the Panama Canal, Jean met an officer by the name of Arthur J. Wojnowski with whom she developed a friendship. They both served in Australia and New Guinea before returning home. Jean returned first to the US via San Francisco and remembered vividly the joy and exhilaration of seeing the Golden Gate Bridge as their ship approached the West Coast harbor.   She was stateside before Arthur and first went to work at Walter Reed Army Hospital in Washington, D.C.   Once discharged from the Army Jean returned to Cleveland and worked at University Hospitals until Arthur returned from the South Pacific.   Jean married Lt. Colonel Arthur J. Wojnowski after the war and they settled on a cozy little farm in rural Ohio. They relished small farm life while Art was active in Civil Defense and Jean periodically worked as a private duty nurse. After a couple of years they had their one child- a daughter, Wanda.   As the years went by Jean enjoyed her past times of gardening, reading, knitting and playing the piano.   She did go back to nursing full time and was an instructor in Obstetrics and Gynecology at an Ohio nursing school. Before she retired in 1973 she served in her last role as the Director of the School of Nursing at the same facility.   Jean and Art moved to Colorado for their first few retirement years to be closer to their daughter, Wanda, who lived there. It was a pleasant change of venue for them. In 1981, Arthur died in Denver and is now buried at Ft. Logan National Cemetery.   Jean then returned to Ohio.   In 1998 Jean decided to have one more major change of lifestyle and moved from Ohio to Oregon. Here she immediately became active in a church, mastered Portland’s transit system, actively gardened and processed summer produce.   She was known for making the best pies!   The Oregon Veteran’s Administration (ODVA) brought Jean’s Army service to the forefront. In 2016 she was their keynote speaker at the Veteran’s Day Ceremony on the Capitol Grounds in Salem. She also participated in the nationwide campaign specifically for military women called “We Are Not Invisible” . At 101 Jean was ODVA’s “Cover Girl” with an extensive interview in the first magazine version of their preexisting newsprint “VN” for all Oregon veterans’.   Jean maintained remarkably good health but not surprisingly had become frailer as she reached her 104th birthday in 2019. With only a few aches and pains until very recently she continued to go to the mall for hours at a time, to participate in her church and to join her daughter, Wanda, in thrift store treasure hunting.   Each morning she joined the family for coffee and relished watching the squirrels and birds in the yard skitter from limb to limb. Her love of nature extended to her active contributions to wildlife and nature non-profit organizations. She lived in her own apartment in her daughter and son-in-law's home. Jean shared her space with two loyal cats that followed her every command (unusual for cats) and kept her company.   A life very well lived indeed!   Please no flowers.  Anyone desiring to make a donation in her name may send it to her beloved alma mater:- Frances Payne Bolton School of Nursing Attention: Brigid Mercer    (In Memory of H. J. Wojnowski) Health Education Campus Samson Pavilion 9501 Euclid Avenue Cleveland, OH 44106

Obituary for H. Jean Wojnowski 104 Years Well Lived     Jean Allison was born in Renrock, Ohio, on May 14, 1915, as the first child of John Murray and Hazel Dye Allison. She had one brother, John (Jack) Murray Allison Jr. who proceeded her... View Obituary & Service Information

The family of Harriet Jean Wojnowski created this Life Tributes page to make it easy to share your memories.

Send flowers to the Wojnowski family.